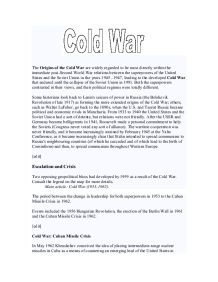 The Origins of the Cold War.

The Origins of the Cold War are widely regarded to lie most directly within the immediate post-Second World War relations between the superpowers of the United States and the Soviet Union in the years 1945 - 1947, leading to the developed Cold War that endured until the collapse of the Soviet Union in 1991. Both the superpowers contrasted in their views, and their political regimes were totally different. Some historians look back to Lenin's seizure of power in Russia (the Bolshevik Revolution of late 1917) as forming the more extended origins of the Cold War; others, such as Walter LaFeber, go back to the 1890s, when the U.S. and Tsarist Russia became political and economic rivals in Manchuria. From 1933 to 1940 the United States and the Soviet Union had a sort of detente, but relations were not friendly. After the USSR and Germany became belligerents in 1941, Roosevelt made a personal commitment to help the Soviets (Congress never voted any sort of alliance). The wartime cooperation was never friendly, and it became increasingly strained by February 1945 at the Yalta Conference, as it became increasingly clear that Stalin intended to spread communism to Russia's neighbouring countries (of which he succeded and of which lead to the birth of Cominform) and then, to spread communism throughout Western Europe. [edit] Escalation and Crisis Two opposing geopolitical blocs had developed by 1959 as a result of the Cold War. Consult the legend on the map for more details. Main article: Cold War (1953-1962). The period between the change in leadership for both superpowers in 1953 to the Cuban Missile Crisis in 1962. ...read more.

and democratization (glasnost) domestically, which eventually made it impossible for Gorbachev to reassert central control and influence over Warsaw Pact member states. Conservatives often argue that the primary cause of death of the Soviet Union was the massive fiscal spending on military technology that the Soviets saw as necessary in response to NATO's increased armament of the 1980s. Soviet efforts to keep up with NATO military expenditures resulted in massive economic disruption and the effective bankruptcy of the Soviet economy, which had always laboured to keep up with its western counterparts. The pace of military technology was advancing such that the Soviets were simply incapable of keeping up and still maintaining a healthy economy. The arms race, both nuclear and conventional, was too much for the underdeveloped Soviet economy of the time. For this reason President Ronald Reagan is seen by many conservatives as the man who 'won' the Cold War indirectly through his escalation of the arms race. However the proximate cause of the end of the Cold War was ultimately Mikhail Gorbachev's decision, publicized in 1988, to repudiate the Brezhnev doctrine. The Soviet Union provided little infrastructure help for its Eastern European satellites, but they did receive substantial military assistance in the form of funds, mat�riel, and advisors. Their integration into the inefficient military oriented economy of the Soviet Union caused severe readjustment problems after the fall of Communism. Though the Cold War is seemingly over, its effects continue to be felt to the present day. American involvement in first supporting the rebels in Afghanistan and subsequently abandoning that region, the military and economic hegemony of the United States, and the rise of previously suppressed nationalisms are but some of the factors emerging from ...read more.

Gaddis traces the origins of the conflict between the United States and the Soviet Union less as the lone fault of one side or the other and more as the result of a plethora of conflicting interests and misperceptions between the two superpowers, propelled by domestic politics and bureaucratic inertia. Leffler contends that Truman and Eisenhower acted, on the whole, thoughtfully in meeting what was understandably perceived to be a potentially serious threat from a totalitarian communist regime that was ruthless at home and that might be potentially threatening abroad. Borrowing from the realist school of international relations, the post-revisionists essentially accepted U.S. European policy in Europe, such as aid to Greece in 1947 and the Marshall Plan. According to this synthesis, "Communist activity" was not the root of the difficulties of Europe, but rather a consequence of the disruptive effects of the Second World War on the economic, political, and social structure of Europe which threatened to drastically alter the balance of power in a manner favorable to the U.S.S.R. The end of the Cold War opened many of the archives of the Communist states, which has increased the support for the traditionalist position. Gaddis has written that Stalin's "authoritarian, paranoid, and narcissistic predisposition" locked the Cold War into place. "Stalin alone pursued personal security by depriving everyone else of it: no Western leader relied on terror to the extent that he did. He alone had transformed his country into an extension of himself: no Western leader could have succeeded at such a feat, and none attempted it. He alone saw war and revolution as acceptable means with which to pursue ultimate ends: no Western leader associated violence with progress to the extent that he did." ...read more.