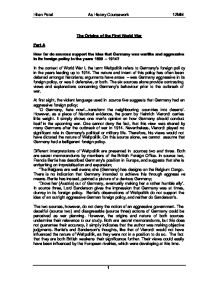 The Origins of the First World War - Sources Questions

The Origins of the First World War Part A How far do sources support the idea that Germany was warlike and aggressive in its foreign policy in the years 1899 - 1914? In the context of World War I, the term Weltpolitik refers to Germany's foreign policy in the years leading up to 1914. The nature and intent of this policy has often been debated amongst historians; arguments have arose - was Germany aggressive in its foreign policy, or was it defensive, or both. The six sources alone provide contrasting views and explanations concerning Germany's behaviour prior to the outbreak of war. At first sight, the violent language used in source five suggests that Germany had an aggressive foreign policy; 'O Germany, hate now!...transform the neighbouring countries into deserts'. However, as a piece of historical evidence, the poem by Heinrich Vierordt carries little weight. It simply shows one man's opinion on how Germany should conduct itself in the upcoming war. One cannot deny the fact, that this view was shared by many Germans after the outbreak of war in 1914. Nevertheless, Vierordt played no significant role in Germany's political or military life. Therefore, his views would not have dictated the nature of Weltpolitik. On this source alone, we cannot assume that Germany had a belligerent foreign policy. Different interpretations of Weltpolitik are presented in sources two and three. Both are secret memorandums by members of the British Foreign Office. In source two, Francis Bertie has described Germany's position in Europe, and suggests that she is embarking on impreialisation and expansion; 'The Belgians are well aware; she (Germany) ...read more.

To quote John Lowe and Robert Pearce, Fritz Fischer's theories 'reopened an issue which had fallen into a stale consensus'. Historians no longer look exclusively at German responsibility. Nevertheless, Fischer's thesis was based on solid evidence, so we cannot overlook it. Germany's Weltpolitik and war planning played a major part, in bringing about the Great War. Another possible cause of the First World War was Austria - Hungary's union with Germany and dispute with Serbia. The assassination of the Archduke Franz Ferdinand forced Austria - Hungary to think long and hard about retaliating against Serbia. Revenge for the assassination would result in a war with Serbia's greatest ally, Russia. Despite this, Austria - Hungary responded and declared war on Serbia; triggering the start of World War I. The popular explanation suggests that without Germany's support in the form Kaiser Wilhelm's blank cheque, Austria - Hungary would not have challenged Serbia, and consequently, Russia. Although well wounded, this explanation can be challenged. The balance of power developed during the years leading up to 1914. Prior to World War I, the European powers sought to maintain a fair equilibrium of power between one another. If a nation attempted to rise above this balance, it brought about tension. This did not happen in the case of Austria - Hungary. Austria - Hungary's foreign minister said in response to the assassination; '(Inaction meant) the renunciation of our Great Power position'. Austria - Hungary had once been a great Empire. To reinstate her power, she attacked Serbia, which ultimately contributed to the outbreak of war in 1914. The first Balkan War, 1908, proved to be a 'dress rehearsal' for the First World War. ...read more.

If anything, colonies were a great show of a nation's strength. The intense Franco - German clashes during the Moroccan crisis are another example that shows how important imperialism was to the great powers; enough to drive them to war. In the shape of imperialism, long standing rivalries did bring about war. The strive for it caused friction and jealousy, sparking off the need for relief and revenge, which came in the form of the First World War. Nationalism, like Imperialism, suggests that the great powers wanted war to show off their might. Germany was united by nationalism. Inspired by Social Darwinism, many factions within Germany encouraged a Germany which included all Germans. This made it easier for the Kaiser to rally support and enter the war. The failure of the larger European powers to combat Balkan nationalism is another factor. Therefore, the role of nationalism as a cause cannot be ignored. Marxist historians hold the view that capitalism, as well as international rivalry, was an underlying cause of the First World War. To conclude, the many factors mentioned challenge the view that the First World War was the result of a badly mismanaged Balkan crisis in the summer of 1914, rather than long standing rivalries. Due to the immediate impact of the assassination, it is understandable to see why this view is taken. The Archduke Franz Ferdinand was killed in Sarajevo on 28th June 1914. This one incident proved to be catalyst for war. If the affair had been managed better, it probably would have only prolonged the outbreak of war. The underlying factors, such as imperialism, the balance of power, and the others which have been discussed, served as a build up to the First World War. ?? ?? ?? ?? Hiten Patel As History Coursework 12MM 1 ...read more.