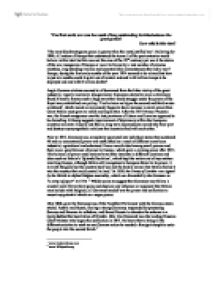 The origins of the first world war

'The first world war was the result of long outstanding rivalries between the great powers' How valid is this view? 'The most disadvantageous peace is greater than the most justified war'. Believing by 1900, all leaders of Europe that understood the turmoil of the past centuries would believe in this ideal but this was not the case of the 20th centaury yet was it the desire of the war-mungerers of Europe or was it to blame by a vast number of calculus mistakes, long standing rivalries and uncontrollable circumstances that led to war? Europe, during the first early months of the year 1914 seemed to be relaxed but how in just six months could it spiral out of control and end in 60 million troops to be deployed and end with 8 million deaths? Anglo-German relations seemed to of decreased from the bitter rivalry of the great industrial, imperial and naval disagreement. Expansion started to slow as Germany found it hard to finance such a huge navy that would struggle under the power of the Royal navy which had one policy, 'Too be twice as big as the second and third navies combined', which meant as any country began to show increase in naval power then Great Britain must grow to match and aspire that. After the 1871 Franco-Prussian war, the French vengeance over the lost provinces of Alsace and Lorraine appeared to be dwindling. R.Henig suggests improvement of diplomacy within the European countries was total illusory and fake as long-term repercussions would take their part and destroy any sympathetic relations that countries had with each other. i Prior to 1871, Germany was completely separated into individual states that numbered 40 and no concentrated power was established as a result of different areas been industrial, agricultural and urbanised. Power was divided among small powers and there was a great balance of power in Europe, which gave a calming peace after 1815. ...read more.

The naval race could never start or ultimately lead to war yet what it did was set a two opposing sides that had similar ambitions though there could only be ever one world superpower, so a clash was due. Bismarck in 1879 had made the fateful decision to make a defensive alliance between Germany and Austria-Hungary in order to contain French isolation and to force Austria-Hungary Corporation that would keep the status Que in Eastern Europe. Bismarck knew that the French would exploit any opportunity to regain Alsace and Lorraine so the isolation tactic was highly credited. So then in 1881 another 'Three emperors' meeting took place in order to negotiate a stable eastern Europe that would involve a peace between the three nations if a fourth power came into conflict. Then in 1882 Bismarck drew in Italy into a triple alliance to help further a peaceful relationship and to strengthen the monarchical principle. This new alliance among nations of Europe sparked huge criticism from France and Russia as the French felt ganged up on by German power and Russia saw a tactical treaty to threaten Russian homeland causing further tensions to rise of mistrust, which could seek a defensive alliance to counter this threat. The Triple Alliance was essentially meaningless for Italy, whom negotiated a secret treaty with France that agreed to Italy remaining neutral should Germany attack France. After a serious nationalist uprising in Egypt, that endangered trade in the Suez Canal with Britain, caused them to ask for French help to restore order but without French reply the British government ordered its troops in. Bismarck took advantage of this and persuaded the French to ask for compensation that would involve an imperial rivalry to increase so that Britain would try and keep the French isolated. Bismarck also saw the imperial ideas of a great advantage and so ventured German claim to areas of Africa on the borders to British interest that would stir up trouble among the European nations, on behalf of German interest the areas of Togo land, South west Africa, Cameroon's and East Africa were under German occupation. ...read more.

This aggressive tactic would also invade Belgium, which could involve Britain although Germany hoped they would not treat the 'Treaty of London' serious. Until 1906 when it was modified it would also invade the Kaiser's home country Holland. This primitive far-fetched plan had many weaknesses in it as they would rest on fate that Britain would not attack and that Russia would take many weeks to mobilise. Tensions were now set and concreted with hate and any challenge to peace would be very difficult to decline as the Kaiser was set minded that he would never be allowed to be bullied by the power of the rival alliance. The first Moroccan crisis of 1905 showed the world that there was a line of separation between powers of Europe yet in 1911 there would be another crisis in Morocco, which would have larger repercussions in Europe. The Sultan of Morocco was under critical pressure as his people were in civil unrest. The French neighbouring the country gave there services to help put down the riots so they sent armed forces in, occupying the city of Fez; which was contrary of terms of the agreement made at the Algeria's conference. The Kaiser made a drastic move to send a gunboat. The Panther, to the shores of Morocco and told the French to fear a bombardment unless they exited. Prime Minister of Britain, Lloyd George announced 'German aggression can't be allowed', now all peace treaties in the past were void and there was a clear road of war. Britain fearing an attack on Gibraltar backed the French and responded with a threat of direct attack on the ship. The Germans fearing a strong relationship pf allies now, backed down under the agreement that Germany could claim the Belgium Congo in Africa, which was swamp and disease ridden. The Kaiser feeling a fool spoke that he would never again let his nation back down to a rival threat. ...read more.