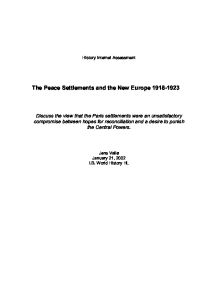 and communist expansion in western Europe. Another dilemma facing the representatives negotiating the peace treaties was to set up new national states in the vacuum created by collapse of Austria-Hungary and the defeat of Germany (Binder p. 70). These newly created states were particularly vulnerable to revolution. Combined with the influenza pandemic which by the spring of 1919 had caused the deaths of millions of people, it was certain that strong nations should be established in eastern Europe in order to withstand communism. This is also why the negotiaters refrained from weakening Germany too badly as this would send the nation into the hands of the Bolsheviks. The immediate armistice presented by Wilson according to his Fourteen Points and revised by the allies went far to protect their position at the coming Peace Conference. It demanded Germany to evacuate all occupied territory, including Alsace-Lorraine and to withdraw beyond a 10 kilometre wide neutral to the east of the Rhine. The German navy was also to be interned in either a neutral or a British port. These terms immediatly ended German influence outside of Germany itself, thereby making it easier for the victorious nations to negotiate the future of Europe. The French Premier Clemenceau was convinced that only an effective balance of power in Europe coul dcontain Germany. He was aware that France, with it's 1.3 million casualties and severely weakened economy was facing Germany which, as a consequence of her collapse of Austria-Hungary and Tsarist Russia, was potentially stronger than in 1914. ...read more.

Therefore it can be said that the Versailles Treaty was only a short-term victory for the Allies. When the American Senate voted against the Treaty it also took away the prestige from the League of Nations that was the only hope for persistent peace that remained after the war. As the balance of power had been knocked over by the disintegration of the Austro-Hungarian empire and the Russian revolution, Europe was left in a very unstable situation. The Allied hopes for reconciliation were in some ways met. The autocratic and militaristic ideas that led great powers like Germany and Austria-Hungary disappeared with the victory of the Allies. The long-term mobilization and race for overseas expansion that were factors of war, became ideas of the past. Even though England and the United States remained a colonial power to be reckoned with, the empiralistic tendencies of the Great Nations of the world were partly forgotten after the war. But this didn't mean that the Allies achieved reconciliation because of the negotiations after the war. The balance of power was lost, and the situation was unstable. Therefore it would be correct to say that the Paris settlements were an unsatisfactory compromise between hopes for reconciliation and a desire to punish the Central Powers, because neither of the two were achieved. Germany prevailed as a more potential power because of the disturbance in the balance of power, and reconciliation between the nations of Europe is not the correct way to describe post-war international relations. It was a short-term victory for democracy and security against militarism, but at the same time a hypocritical act of vengeance and economic ignorance. ...read more.