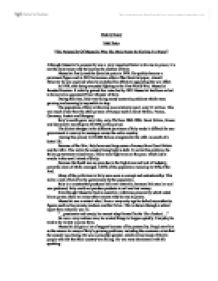 &quot;The Personality Of Mussolini Was The Main Factor In His Rise To Power&quot;

History Essay Matt Petry "The Personality Of Mussolini Was The Main Factor In His Rise To Power" Although Mussolini's personality was a very important factor in his rise to power, it is not the only reason why he became the dictator of Italy. Mussolini first joined the Socialist party in 1910. He quickly became a prominent figure and in 1912 he became editor of the Socialist paper, Avanti!. However he was expelled when he switched his efforts to supporting the war effort. In 1919, after being wounded fighting in the First World War, Mussolini founded Fascism. It initially gained few votes but by 1922 Mussolini had been called to Rome to be appointed Prime Minister of Italy. During this time, Italy was facing many economic problems which were growing and seemingly impossible to stop. The population of Italy at this time was relatively small, only 35 million. This was much lower than the other powers of Europe such as Great Britain, France, Germany, Austria and Hungary. Italy's wealth grew very little, only 4% from 1860-1896. Great Britain, France and Germany's wealth grew 40-50% in this period. ...read more.

Instead of working together as one power, they fought and argued with each other which not only distracted them from the threat of Fascism, but also made their individual parties weaker, while Fascism grew stronger. The Catholic Church also proved a problem for the opposition of Fascism. After the appointment of a new Pope, Pius XI, in February 1921, the Catholic party began working to eradicate left wing influences within the party itself and also undermine the anti-fascist strike being called for by the loose coalition formed by the Liberals and the Socialists called the Alliance Of Labour. The new Pope saw Fascism as an opportunity to improve the official status of the Catholic Church, which the Liberal governments had ignored. Because of this, the Catholic Church worked against the opposition instead of working with them to stop the rise of Fascism. Another contributing factor was the mistakes made by the current government and the opposition parties at the time which Mussolini exploited to his advantage. In 1918, the Prime Minister, Orlando, introduced all voting for all men, not just the wealthy and important. This meant that the people now had more freedom in who they wanted in power. ...read more.

The question of whether the attack would actually happen or not is still controversial. Mussolini used the violence to his advantage, reassuring that if Fascism was allowed to remain, then the army and the King's positions would be safe. Mussolini convinced PM Giolitti that the violence was the only way to eradicate the Socialist party and that after the Socialists were gone the violence would cease. Mussolini promised to restore order if appointed into power. Although the Fascist party was relatively small to begin with, it did have some supporters, and for a political group to be successful, it needs support. Fascism was supported by middle and upper classes through Mussolini's exploitation of their fear. Lower middle class students from university, civil servants and the respectable 'bourgeois' families also supported Fascism. Large industrialists, who were against the trade unions supported and provided funds for the movement. Many Conservative groups like the Police, Army and rural landlords felt sympathy for the Fascists stand against the Left Wing. As a result of Mussolini's charismatic and pragmatic character, along with the weaknesses and mistakes made by his opposition, the growing violence Mussolini exploited, and the support he gained Mussolini was able to push himself forward and in October, 1922 he was called to Rome and appointed Prime Minister of Italy. ...read more.