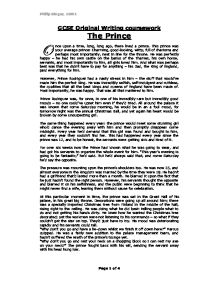 GCSE Original Writing coursework The Prince O nce upon a time, long, long ago, there lived a prince. This prince was your average prince: Charming, good-looking, witty, full of charisma and perhaps most importantly, next in line for the throne. He was perfectly happy - he had his own castle on the banks of the Thames, his own horse, servants, and most importantly to him, all girls loved him. And what was perhaps best was that he didn't have to pay for anything - his Dad, the King of England, paid everything for him. However, Prince Rodriguez had a nasty streak in him - the stuff that would've made him the perfect King. He was incredibly selfish, self-indulgent and ruthless, the qualities that all the best kings and queens of England have been made of. Most importantly, he was happy. That was all that mattered to him. Prince Rodriguez was, for once, in one of his incredibly rare but incredibly good moods - no one could've upset him even if they'd tried. All around the palace it was known that come Saturday morning, he would be in an a foul mood, for tomorrow night was the annual Christmas Ball, and yet again his heart would be broken by some unsuspecting girl. The same thing happened every year: the prince would meet some stunning girl who'd dance the evening away with him and then promptly disappear come midnight. ...read more.

From about 6 that evening, he waited outside, waiting for the first guests to arrive. Everyone else in the palace was working their socks off, finishing organising the food and helping to get the band ready - meanwhile the prince was oblivious to it all. In the middle of the great hall, amidst all the chaos, James was stood on top of a stepladder. His grey hair was badly ruffled and there were bags underneath his eyes. He was finishing decorating the tree, putting baubles on the Finnish fir tree and directing people all over the place. Whilst he was unpopular with the other servants, every year he more than proved his worth to the palace. The ball didn't start until 7:30 that evening, but people started arriving as soon as a quarter to seven. Finally, it looked like everything might just all slot into place. Amazingly, James had found enough time to spruce himself up, and was already gossiping to the guests. After everyone had arrived and the prince had done his meet and greet bit, he went back inside to the warm Great Hall. He was in awe of it. Every year his servants did a better job than the year before. This time he really should remember to thank them, he thought. ...read more.

"So I suppose it's just you and me, now that everyone's gone home," The prince said, turning to Hailey and smiling. "So it is. I've got a present for you though," Hailey whispered, building up tension in the prince's heart. He could barely contain his excitement. "I like presents - ohh what is it, what is it?" The prince was almost jumping up and down like a toddler with eagerness. "Close your eyes...." Hailey said, the prince obliging very quickly. Hailey took off her white gloves and placed them on the table behind them, next to a half eaten ham. "Ohh hurry up, I'm getting all excitable," the prince was acting just like a little boy - Hailey was beginning to wonder about the prince's mentality. "Here it is." Hailey said, delivering a hard, sharp slap to the prince's left cheek. He spontaneously burst into tears, clutching at his stinging cheek. "What's that for? What did I do wrong? It was going so well I thought." He enquired. His cheek was stinging like TCP on a cut, and he had a spectacular handprint on his cheek. "That's for last time when you ended it." With that, she picked up her gloves from the table and walked out of the hall not even looking back. She went out of the door and into the darkness. The prince collapsed in a sobbing heap on the floor. Philip Singer, 10W1 Page 1 of 4 ...read more.