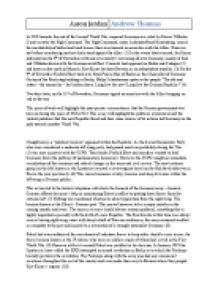 The Problems of the Weimar Republic and the Path to War.

﻿Aaron Jordan Andrew Thomas In 1918 towards the end of the Second World War, imperial Germany was ruled by Kaiser Wilhelm II and secretly the High Command. The High Command, under Ludendorff and Hindenburg, sensed the inevitability of defeat and tried to ease their way towards an armistice with the Allies. However not before considering one last ditch stand against the allies. (1) In the events that occurred, the Kaiser abdicated on the 9th of November with massive munity?s occurring all over Germany, mainly at Kiel and Wilhelmshaven with the German naval fleet. Councils had appeared in Berlin and Cologne (2) and down in the south in Munich, Kurt Eisner declared Bavaria as an independent republic. (3) On the 9th of November Fredich Ebert took over from Prince Max of Baden as the Chancellor of Germany. On top of the Reichstag building in Berlin, Philip Scheidemann spoke to the people ?The old and rotten ? the monarchy ? has broken down. Long live the new! Long live the German Republic!? (4) ...read more.

This proved however to be a major mistake in the coming months and years. The army in essence should always remain apolitical, something that is highly important especially with the birth of a new Republic. The Reichswehr in that time was always seen as having right wing views with deep beliefs of Prussian militarism, the army remained wedded in sympathy to the past and aspired to a restoration of a strongly nationalist Germany. (8) Erbert had even authorised the recruitment of volunteer forces to keep order should a crisis arrive, the forces became known as the Freikorps who were ex-soldiers many of whom had served in the First World War. (9) However at first it seemed Erbert was justified in his decision. In January 1919 the Spartacists (now called the KPD) attempted an armed revolution in Berlin as to which the Freikorps brutally put down the revolution. The Freikorps along with the army quashed any communist resistance throughout the rest of the country and even made their way to Bavaria where they purged Kurt Eisner?s regime. ...read more.

His successor, Bauer, eventually agreed to accept the treaty. (13) The Republican ministers Muller and Bell who signed the treaty were widely criticised in Germany so much so that it was claimed that German armies had not been defeated by the enemy, but betrayed by the secret enemy, the socialist and the Jew. The myth of the ?Stab in the back? (Dolchstoss) was born. (14) Germany as a result of the treaty lost several eastern territories, the signing of the war guilt clause, reparation payments which were viewed by J.M Keynes who believed the reparation payment was three times greater than it should have been. The army was reduced to 100,000 men with conscription abolished. It is no wonder then in Berlin January 1920 that Dr Kapp and certain army officers hatched a plot to gain control of Berlin, otherwise known as the Kapp Putsch. They were attempting to set up a military dictatorship in Germany. The government as expected tried to request the help needed in crushing the rebellion, the army leaders refused. General Von Seeckt responded ? Reichswehr does not fire on Reichswehr?. (15) ...read more.

The author has very strong knowledge of the early days of the German republic and uses a good level of detail throughout. However, this answer often slips into narrative, rather than linking points to the question and explaining why there were problems in the early days and whether solutions were found. 3 out of 5 stars.