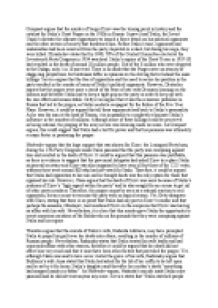 The Purges during Stalin's reign

﻿Conquest argues that the murder of Sergei Kirov was the turning point in history and the catalyst for Stalin?s Great Purges in the 1930s in Russia. It gave Josef Stalin, the Soviet Union?s dictator the ultimate opportunity to launch a fierce attack on his political opponents and the other sectors of society that threatened him. Before Stalin?s time, opponents and undesirables had been removed from the party, deported or exiled, but during his reign, they were killed. Khrushchev states that by 1940, 70% of the Central Committee elected at the Seventeenth Party Congress in 1934 was dead. Stalin?s regime of the Great Terror in 1937-38 had resulted in the death of around 20 million people. Out of the 8 million who were deported to the Gulags, only 1 in 10 survived. There is no doubt that the Purges were an atrocity of staggering proportions, but historians differ in opinions on the driving factor behind the mass killings. Service argues that the fear of opposition and the need to secure his position in the party resulted in the murder of many of Stalin?s political opponents. However, Deutscher argues that the purges were more a result of the fears of war with Germany looming on the horizon and therefore Stalin had to keep a tight grip on the party in order to keep up with the war effort and remain stable. Getty even argues that it was the economic problems in Russia that led to the purges, as Stalin needed a scapegoat for the failure of the Five Year Plans. However, it could be argued that all these arguments lead back to Stalin?s personality. ...read more.

Bukharin stated that as a result of this insecurity, ?he could not help taking revenge for it on others?. More to the point, Service does argue that although he was not a sufferer of paranoia, he was not ?fully in control of himself?. Djilas argues that Stalin?s personality was indeed a main part in producing the purges, as he was ?a monster? and would commit any crime for success. Yet, Stalin?s purge of the army seems to have no logical or rational explanation. In 1937 Marshal Tukhachevsky, a hero of the Civil War, was arrested along with rest of his general staff. Their charges included being part of a Japanese conspiracy that would put the Russian Generals in power. Deutscher argues that a reason for these purges was that Stalin feared the power of the army and believed that they would become disloyal to him. However, Ulam makes the point that the Army generals were fiercely loyal and they were also not politically ambitious. Also, Russia was on the verge of a possible war and therefore, purging the army was not a sensible, rational decision. It could be argued that this is the ultimate example of Stalin?s paranoia ruling over his common sense. Nevertheless, it could be argued that there was opposition against Stalin and therefore his decision to eradicate leading generals was one, which would guarantee him security. In particular, the purges of the Kulaks could be argued to have been because there was no place for the wealthier kulaks in the process of setting up a more socialist agricultural system. Stalin took the reports of peasants killing animals and raiding grain supplies as proof that the Kulaks were trying to wreck his policies in the countryside. ...read more.

Conquest argues that every decision Stalin made was driven by his personality and Deutscher admits that Stalin displayed a ?quasi-paranoiac? tendency. With the death of Lenin, Stalin sought for a way to remain in control of the people and to keep his dictatorship. Therefore, the ?Great Terror?, as Conquest calls it, was unleashed on the people, resulting in the torture and deaths of millions. It could be argued that the driving factor behind the purges was Stalin?s paranoia and his suspicions that he would be usurped. Nevertheless, although most historians would agree that this is an underlying reason for the purges, to say that paranoia was the only driving force would be incorrect. Stalin faced opposition from inside the party, the threat of war from Germany and economic problems in Russia and therefore, it could be argued that the purges were executed to keep Stalin in power and to keep up the war effort. Ideology and the influence of Lenin also played a part, as Stalin believed that the purges were needed in order to create a utopian state. Yet, Conquest argues that the purges were also fuelled by Stalin?s desire for supreme power. With the death of his wife and in Kirov, Stalin saw opposition to his regime and this could be argued to have fired up his paranoia that he could not trust anyone. However, it could also be argued that Stalin was not solely to blame for the purges that swept Russia and the NKVD, Yezhov and even ordinary party members could also be held responsible for letting it get out of control. Ultimately, there were many reasons and many people involved in the Great Purges, but it cannot be denied that Stalin, at the head of the Party, was the commander and at the forefront all the way through. ...read more.