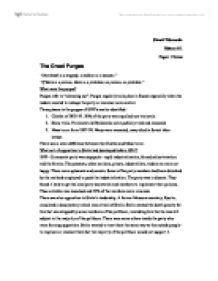 Shruti Tibrewala History SL Paper 1 Notes The Great Purges "One death is a tragedy, a million is a statistic." "If there is a person, there is a problem; no person, no problem." What were the purges? Purges refer to "cleansing out". Purges regularly took place in Russia especially when the leaders wanted to reshape the party or exercise more control. Three phases in the purges of 1930's can be identified- 1. Chistka of 1932-35. 20% of the party was expelled non-violently. 2. Show trials. Prominent old Bolsheviks were publicly tried and executed. 3. Mass terror from 1937-38. Many were executed, many died in Soviet labor camps. There was a clear difference between the Chistka and Mass terror. What sort of opposition to Stalin had developed before 1934? 1933- Communist party was unpopular- rapid industrialization, forced collectivization and the famine. The peasants, urban workers, priests, industrialists, traders etc were not happy. There were upheavals and unrests. Some of the party members had been disturbed by the methods employed to push the industrialization. The party was in dissent. They found it hard to get the local party secretaries and members to implement their policies. Thus a chistka was launched and 22% of the members were removed. ...read more.

He encouraged party members to criticize and denounce those in higher levels, resulting in a flood of accusations. The purges were not restricted to the party only. The politburo passed a resolution condemning 'Anti soviet elements" in July 1937. They were scientists, writers, artists, musicians, managers and administrators. A quota system was applied. A media campaign to encourage people to criticize people was started. In 1937, Stalin claimed that the army was plotting to overthrow him. He had confessions beaten out of them and were then executed. Many soviet citizens died in prison, either shot or dying from torture. Those who did not die were sent to labor camps. The labor was used to make large scale projects. Many died in labor camps. Stalin called a halt to the terror towards the end of 1938. The purges were destabilizing Russian society. In 1940, a hitman on Stalin's orders killed Trostsky. Almost all the old Bolsheviks had been wiped out. Stalin blamed the NKVD for the excesses of the terror. The victims- * Leading Party members * Senior military officers * Managers, engineers and scientists * People related to those who had been purged * Party and state leaders * NKVD * Peasants and industrial workers Interpretations of the Great Purges Very little evidence about the purge was released. ...read more.

At the end of the process, Stalin emerged as the dictator of the USSR with supreme control over the party and a populace subservient to the leader and the party. Historiographies J. Arch Getty- Members denounced leaders and each other for dubious class origins, long forgotten sins and current misdeeds. The party officials even resorted to filling positions with politically safe employees of the NKVD. W.G. Krivitsky- Stalin knew that other ranking generals only reluctantly supported him and were popular when his prestige was the lowest. He felt no certainty that they would continue to recognize his totalitarian authority. G. Gill- People hoped to gain leniency for themselves or their families by co-operating with the NKVD. Thus they were willing to denounce others to the security organs. R. Conquest- 20 million were killed in the purges between 1937-38. The purges were Stalin's personal achievement. It led him to absolute power. R. Manning- The purges are linked to industrialization. When things went wrong, there was a subconscious temptation to seek scapegoats. A. Bullock- Purges were caused due to Stalin's narcissistic personality, his psychological need to confirm and reassure and his belief that he was a genius marked out to play a unique historical role. S. Cohen- Stalin wanted to get rid of the old Bolsheviks because they remembered everything in Bolshevik history and knew that Stalin was not the Lenin of today. ?? ?? ?? ?? ...read more.