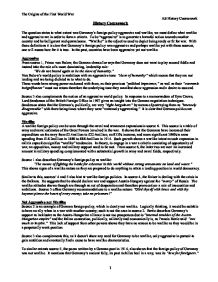 The question states to what extent was Germany's foreign policy aggressive and warlike; we must define what warlike and aggressive are in order to form a criteria.

History Coursework The question states to what extent was Germany's foreign policy aggressive and warlike; we must define what warlike and aggressive are in order to form a criteria. To be "aggressive" is to generate a harmful action towards another country and be belligerent and quarrelsome. "Warlike" is the adjective used to depict being ready or fit for war. With these definitions it is clear that Germany's foreign policy was aggressive and perhaps warlike yet with these sources, one will assess how far it is true. In the past, countries have been aggressive yet not warlike. Aggressive From source 1, Prince von Bulow, the German chancellor says that Germany does not want to play second fiddle and instead take the role of a more dominating, leadership role: "We do not intend again to be the slave of humanity." Von Bulow's world policy is ambitious with an aggressive tone: "slave of humanity" which means that they are not leading and are being dictated as to what to do. ...read more.

Source 1 also describes Germany's foreign policy as warlike: "The means of fighting the battle for existence in this world without strong armaments on land and water." This shows signs of a warlike nature as they are prepared to do anything to attain a leading position in world democracy. Similar to this, sources' 4 and 5 also hint at warlike foreign policies. In source 4, the Kaiser is dealing with the crisis in the Balkans. He suggests that he should declare war and support Austria-Hungary against the "mercy" of Russia. The warlike attitudes shown though are through an act of desperation and therefore provocation: a mix of insecurities and ambitions. Source 5 offers Germany recommendations to a warlike nature: "Gird thyself with brass and with thy bayonet pierce the heart of every enemy; take no prisoners!" Not Aggressive nor Warlike Source 2 is an example of German foreign policy, which is clearly not warlike. ...read more.

In summary, one must note the dates in the provenance giving particular reference as to it's order and if at all any surrounding events for example source 4 gives the thoughts of the Kaiser concerning the Balkan conflict in July, 1914 where he is wary and uncertain of any German role, as in not aggressive and geared to war, but is also critical of France "playing off" all other powers to keep her "balance of power." On the other hand source 1 is contradictory and portrays German foreign policy as aggressive and semi-warlike to some extents. To end, in the early stages from 1899 Germany is building up her aggressive nature such as her "wants" in source 2 and from 1907, she is moving to a more warlike pose with a toned down aggression, further complimented in source 6 by the army and naval estimates. ?? ?? ?? ?? The Origins of the First World War AS History Coursework 1 ...read more.