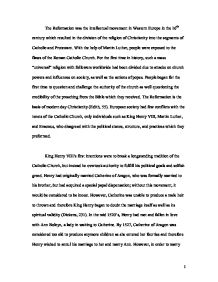 The Reformation was the intellectual movement in Western Europe in the 16th century which resulted in the division of the religion of Christianity into the segments of Catholic and Protestant.

The Reformation was the intellectual movement in Western Europe in the 16th century which resulted in the division of the religion of Christianity into the segments of Catholic and Protestant. With the help of Martin Luther, people were exposed to the flaws of the Roman Catholic Church. For the first time in history, such a mass "universal" religion with followers worldwide had been divided due to attacks on church powers and influences on society, as well as the actions of popes. People began for the first time to question and challenge the authority of the church as well questioning the credibility of the preaching from the Bible which they received. The Reformation is the basis of modern day Christianity (Edith, 55). European society had few conflicts with the tenets of the Catholic Church, only individuals such as King Henry VIII, Martin Luther, and Erasmus, who disagreed with the political stance, structure, and practices which they preformed. King Henry VIII's first intentions were to break a longstanding tradition of the Catholic Church, but instead he overtook authority to fulfill his political goals and selfish greed. Henry had originally married Catherine of Aragon, who was formally married to his brother, but had acquired a special papal dispensation; without this movement, it would be considered to be incest. However, Catherine was unable to produce a male heir to thrown and therefore King Henry began to doubt the marriage itself as well as its spiritual validity (Dickens, 231). In the mid 1520's, Henry had met and fallen in love with Ann Boleyn, a lady in waiting to Catherine. By 1527, Catherine of Aragon was considered too old to produce anymore children as she entered her fourties and therefore Henry wished to annul his marriage to her and marry Ann. However, in order to marry Catherine, Henry had acquired a papal dispensation and to annul this, would imply that the first dispensation was in error, which the pope would not willingly admit. ...read more.

He came to believe that the church's teachings, that pilgrimages, relics, and penances could earn salvation, were false. These ceremonies, along with the sale of indulgences, were simply a way for the Roman Catholic Church and its popes to scam the already poor peasants to help their own financial situation. In 1516-1517, Luther was horrified when the church sent the Dominican friar Johann Tetzel around Germany to sell indulgences in the town squares in order to raise funds for the rebuilding of St Peter's Basilica in Rome and raise money for itself (Tiscali Reference, 1). This was known as the German Indulgence Scandal. During the Middle Ages, the sale of indulgences and abuses were common during times of growing papal financial difficulty. Indulgences, in this case money, substitute as part of an individual's sequential penalty for sin. It was stated in the Bible that "one cannot buy away their sins", therefore making the sale of indulgences by the church not only against the Bible, but against the teachings of God himself. On October 31st, 1517, Martin Luther posted his 95 Theses on the door of the Castle Church in Wittenberg, mainly attacking the sale and abuse of indulgences, initially meaning to cause debate and discussion. Within his Theses, Luther attacked the practices of the church and suggested that religion was an inward relationship with God, and was summoned to Rome the following year to defend his actions (BELIEVE, 1). His reply to this was to attack the papal system more fiercely, and published his three greatest works in 1520, Address to the German Nobility, On Christian Liberty, and On the Babylonish Captivity of the Church, expressing his views (Vincent, 1). In Address to the German Nobility, Luther attacked the authority of the pope by calling on the German people to reform the church. He argued in On Christian Liberty that "the soul is justified by faith alone, and not be any works" which became the founding principle of the Reformation theology. ...read more.

Martin Luther criticized the Roman Catholic Church for improper procedures and was thought to be a heretic, causing mass chaos throughout Europe. Erasmus also disagreed with the actions of the popes and expressed his views through his written works; peacefully addressing the corruption of the church. The Reformation not only separated Christianity into Catholic and Protestant, but it changed the world in such a way that the effect still continues today. People began to question the credibility of the pope's preaching, and were exposed to God through personal relationships for the first time. Not only do people today question credibility, but some also question the validity of religious values, and in some cases, religion altogether. Today many people still believe that it is not necessary to attend church or mass prayer in order to please God, but they can do so in the comfort of their own homes; an idea formulized from the Reformation. Many people believe that religious institutions still take money from their followers and use this as personal profit, not benefiting those attend the institutions in any way. Political powers still manipulate religion in a way which it will work to their advantage, whether they believe in the faith or not, in order to gain popularity. Also, those in power manipulate society as well in order to gain personal profit and pleasure, sometime even through funding received through religious institutions. Religions, not only Christianity, but others such as those of Islamic faith, have been divided due to the conflict between practices within the faith. Religion no longer possesses the unity which it once did, but instead can be interpreted in many ways. Everyone is able to possess a personal opinion on religion and express it through endless forms of media whether it be print, internet, or any other, and is able to do so without feeling threatened. Through realization of these flaws we can clearly see that the Reformation may be been a breakthrough in religious freedom, but it has also corrupted the society in which we live today. ?? ?? ?? ?? 1 ...read more.