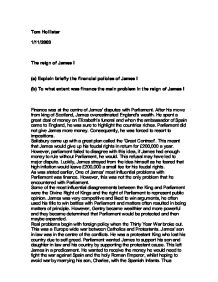 Tom Hollister 1/11/2003 The reign of James I (a) Explain briefly the financial policies of James I (b) To what extent was finance the main problem in the reign of James I Finance was at the centre of James' disputes with Parliament. After his move from king of Scotland, James overestimated England's wealth. He spent a great deal of money on Elizabeth's funeral and when the ambassador of Spain came to England, he was sure to highlight the countries riches. Parliament did not give James more money. Consequently, he was forced to resort to impositions. Salisbury came up with a great plan called the 'Great Contract'. This meant that James would give up his feudal rights in return for �200,000 a year. ...read more.

Real problems begin with foreign policy when the Thirty Year War broke out. This was a Europe wide war between Catholics and Protestants. James' son in law was in the centre of the conflicts. He was a protestant King who lost his country due to self greed. Parliament wanted James to support his son and daughter in law and his country by supporting the protestant cause. This left James in a predicament. He wanted to receive the money he would need to fight the war against Spain and the holy Roman Emperor, whilst hoping to avoid war by marrying his son, Charles, with the Spanish Infanta. Thus resulting on added pressure on the Roman Empire to give the elector of Palatinate his land back. ...read more.

However, Parliament interfered and the decision was reversed. This tougher line with the Catholics led to the Gunpowder plot, with included a plot on James' life. This also resulted in armed revolution from overseas Catholics. This proves that finance was a major ingredient in the ever present boiling pot of disputes between James I and Parliament but it was not the only ingredient. James handled many issues with Parliament fairly well; however, finance was a particularly difficult matter in which to find a balance, with James wanting more money and Parliament not prepared to give it to him. Subsequently, along with help and ideas from close staff, he managed to bear with the mess of finance but without the reality that England did not the riches that James believed, he would never excel in the issue. ...read more.