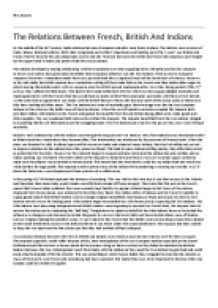 The Relationships Between French, British And Indians in the New World.

﻿Ben Jacques ________________ The Relations Between French, British And Indians By the middle of the 18th century trade relations between European colonists were firmly in place. The Indians were a source of trade, labour, land and soldiers. Both sides recognised each other?s importance and leading up to the 7 years? war Britain and France tried to become the prevailing trade source and ally. Tensions between the British and French developed as each fought for the upper hand in trade and protect land they each claimed. The Indians developed a trading relationship with the Europeans over time supplying them with pelts and furs for weapons in return. One nation that particularly benefited from European influence was the Five Nations. Their access to European weaponry from New Amsterdam made them very powerful and they conquered much of the North East of America. However in the mid-1660s the British capture New Amsterdam cutting off their trade links as the French and their Indian allies began to attack leaving them defenceless with no weapons, also the British proved inadequate allies. ...read more.

Britain?s main relationship with the Indians was through the Iroquois and Five Nations. They first traded but as mentioned earlier as Britain took New Amsterdam they became allies. This relationship was reinforced by the province of Pennsylvania. When the state was founded in 1681 it offered open and fair terms on trade and attracted many Indians, their lack of militia only served to improve relations as the Indians knew they posed no threat. This lead to many Indians settling nearby, they effectively acted as protection for the state. However as the colonists began to expand and take more land the Indians became restless and an Indian uprising was imminent. The state called on the Iroquois to help them and from 1721 to 1732 James Logan worked to make sure the alliance was extended to Pennsylvania. This meant that the Penn family could buy up Indian land and resell it to white settlers for huge profit. The Iroquois acted to prevent any of the Indians from protesting or causing any trouble. ...read more.

It was evident to the French that the British were encroaching on land they claimed at the Grand Settlement; however the British believed it was theirs under the Grand Settlement. The Iroquois had been unable to keep the two apart and the fine status quo that they had profited off had collapsed. In conclusion relations between the French, British and Indians were mixed as each faction tried to work for their own gain. The Iroquois especially would suffer because of this, their manipulation of the two European nations especially at the Grand Settlement and their actions in Pennsylvania led to tensions rising on their own land as they failed to maintain the delicate balance between the two. Britain gained much from trade with the Indians as they used the Five Nations to gain land and could easily ship their goods off to the Atlantic. This was something at which France failed, they struggled to ship into the Atlantic as many of their ports were frozen and Loiusbourg had been captured, this made Ohio even more important to them as otherwise Canada could be choked of supplies. ...read more.