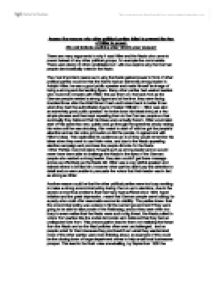 The rise of hitler

Assess the reasons why other political parties failed to prevent the rise of Hitler to power. (Do not include anything after 1933 in your answer) There are many arguments to why it was Hitler and the Nazis who came to power instead of any other political groups, for example the communists. There were plenty of other candidates but I will now explore why the German people democratically voted in the Nazis. The most important reason as to why the Nazis gained power in front of other political parties could be that the n**i's had an extremely strong leader in Adolph Hitler; he was a good public speaker and made himself an image of being a strong and demanding figure. Many other parties had weaker leaders who could not compete with Hitler, this put them on the back foot as the German people needed a strong figure and at the time, they were facing troubled times after the Wall Street Crash and looked back to better times when they had the authoritarian figure of Kaiser Wilhelm II. Hitler was also an extremely good public speaker, he broke down his ideals into just a few simple phrases and then kept repeating them to the German people so that eventually they believed that his ideas were actually there's, Hitler would also start off his speeches ...read more.

This lead to the n**i votes snowballing, by September 1930 the Nazis had increased their share of the vote by over 7 times that of what they had received during the previous elections and it was up to 18.3% of the vote, then by the elections two years later they had doubled the share of their votes to 37.4%, during these years we can see a drop in seats gained by the SPD, leading me to suggest that the Nazis managed to sway voters towards their party. We know that the n**i party did face some opposition by the Reichstag cabinet, although the Nazis had a majority in the Reichstag in 1932 von Papen refused to hand the chancellorship over to Hitler, the Reichstag was dissolved after a vote of no confidence and new elections were held, Nazis votes did fall however they were still the largest party in the Reichstag for both parties to be happy a coalition government had to formed, Papen was sacked by Hindenburg and then Schleicher became chancellor and Strasser was given vice-chancellorship on 3rd December the Nazis were pleased with this however Strasser resigned after just 12 days due to an argument with Hitler. In the end due to the sheer power of the n**i government Hitler was appointed Chancellor on 30th January 1933, 3 days after Schleicher's resignation. ...read more.

If Hindenburg had held out and not appointed Hitler as chancellor, there is a chance he may never have got into power, although he made great gains in the election of 1930 and the July election in 1932, in the second election of 1932, in the November, Hitler lost 4.3% of the votes, this could be a sign that things had started to stabilise after the Wallstreet Crash, and if Hitler hadn't been given the Chancellorship that year his votes would have progressively deteriorated and he would never have seized power in Germany! However at the time preventing Hitler from becoming Chancellor was leading to unrest within the country, the Reichstag couldn't pass any legislation due to the n**i coalition blocking it and so Hindenburg believed it was best to have him on side. I believe that Hitler being a strong leader was the most important reason as to why the Nazis gained power in Germany, this is because he could captivate German people with his speeches and also make people believe that the n**i policies were what they wanted, he repeated and applied them to people's lives, to make them believe that they would benefit their lives! No other party had such a strong leader, and as you can see no other party had such an impact on the German people, it was near impossible to challenge Hitler, he had a fiery temper and a strong will! ...read more.