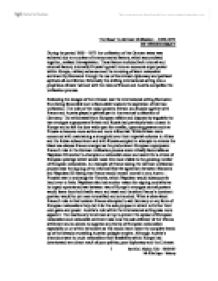 The Road To German Unification - 1856-1871 EXTENDED ESSAY During the period 1856 - 1871 the unification of the German states was achieved due to a number of interconnected factors, which accumulated together, realised this aspiration. These factors included both internal and external factors; internally Prussia's growth into an economic super power within Europe, military advances and the invoking of latent nationalist sentiment by Bismarck through the use of his shrewd diplomacy and political aptitude all contributed. Externally the shifting international setting into a propitious climate twinned with the roles of France and Austria compelled the unification process. Following the ravages of the Crimean war the international setting fluctuated from being favourable and unfavourable towards the aspiration of German unification. The roles of the major powers; Britain and Russia together with France and Austria played a pivotal part in the eventual unification of Germany. The withdrawal from European affairs and disputes by arguably the two strongest superpowers Britain and Russia had previously been unseen in Europe and so left the door wide open for smaller, upcoming powers such as Prussia to become more active and more influential. While Britain were concerned with maintaining a stronghold over their imperial colonies in Africa and the Indian subcontinent and with Russia occupied in attempts to reverse the black sea clauses France emerged as the predominant European superpower. ...read more.

Bismarck through appointing two key figures in von Roon and Von moltke modernised the army a central command structure was initially introduced which enabled better and improved communications, logistics and enabled supplies and troops to be mobilised efficiently through the use of the railways. As well as this manpower was increased through the implementation of conscription the numbers went from 40000 to 63000 alongside this the service time of a soldier was increased from 1-3 years this resulted in an army which was bonded together, better organised and more professional. The organisation and efficiency of the new army was shown ion the Franco- Prussian war where France managed to mobilise only 200000 troops onto the battlefield in comparison to the 380000 of Prussia. Alongside all these factors the formation of new barracks and regiments gave a greater strength of unity and this unity was illustrated on the battlefield through the execution of new war tactics such as Von Moltke's empty battlefield strategy where his forces would divide into 3 regiments and then would surround the enemy from all sides leaving them in an uncompromising position. Together with structural advances technological advances such as the needle gun, which could be loaded and fired far more swiftly, and effectively than the previous muzzle loaded rifles allowed the Prussians to grasp victory on various occasions. ...read more.

Bismarck refused to apologise and France declared war making themselves look the aggressor in a war which they lost because of a better, more organised Prussian army. Succinctly through Bismarck's success all of Germany looked to him for leadership in the German unification struggle. However Bismarck could not have known how France and Austria would have reacted to his politics nevertheless through his cunning tactics and from knowing that Prussia had a modern and better organised army than its aggressors he united Germany in conservative and imperialistic manner whether he intended to or not and therefore I deem that Bismarck was an opportunist who learnt to gain the best out of circumstances rather than a master planer. In conclusion Germany was united because of a number of interconnected factors such as the growth of Prussia into an economic superpower, which in turn provided the resources needed for the Prussian army to be strengthened to the extent that it could math if not succeed that of any other European power. As well as this the fluctuating international setting which Bismarck used to great effect alongside invoking latent nationalist sentiment to bring about a viable unification struggle and eventually achieve the endeavour of German unification. ?? ?? ?? ?? 1 By Bilal Abdula 12R - 30/04/07 Mr Khalique - history ...read more.