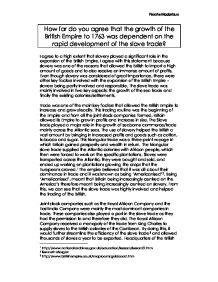 How far do you agree that the growth of the British Empire to 1763 was dependent on the rapid development of the slave trade? I agree to a high extent that slavery played a significant role in the expansion of the British Empire. I agree with this statement because slavery was one of the reasons that allowed the British to import a high amount of goods and to also receive an immense amount of profits. Even though slavery was considered of great importance, there were other key factors involved with the expansion of the British Empire - slavery being partly involved and responsible. The slave trade was mainly involved in two key aspects: the growth of the sea trade and finally the existing colonies/settlements. Trade was one of the main key factors that allowed the British Empire to increase and grow steadily. This trading routine was the beginning of the Empire and from all the joint stock companies formed, Britain allowed its Empire to grow in profits and increase in size. The Slave trade played a major role in the growth of seaborne commerce/trade mainly across the Atlantic seas. The use of slavery helped the British a vast amount by bringing in increased profits and goods such as cotton, tobacco and sugar. This triangular trade was a three point voyage in which Britain gained prosperity and wealth in return. ...read more.

The ports also achieved at the same time. Around all the British docks including London and Bristol, many shops and public facilities were arranged to encourage the merchants and public to unwind and take a break off their trading businesses. Things such as coffee shops, restaurants and dockyards were constructed4 and this influenced the people to make use of the sites and services. Due to all these sites, it led an increase to the surrounding businesses leading to other money intakes. Here the use of slavery helped increase the size of the British Empire because all the trade led up to other forms of moneymaking. Another reason they were able to trade so freely was down to the British Royal Navy. The royal navy helped the British in three different ways. They did this by firstly clearing the Dutch off the seas and replacing them as being the most dominant maritime country of that time. They also vacated the seas of the French and therefore without the French and the Dutch, they had complete control and supremacy over the seas. This supremacy was however, only down to their dominance. As well as that, the British Royal Navy also controlled the seas, and made anyone who crossed the Atlantic pay taxes to the British. The Atlantic seas were in full power of the British, which made it easier for the British ships to trade slaves whenever they wanted. ...read more.

This was highly profitable for the Britains because it increased their money intake tremendously. Settlement was the other key aspect in the growth of the British Empire. All the colonies the British owned were amongst the best for producing the best groceries and articles; however these colonies still relied upon the slave trade too. This was because their crop producing plantations were expanding. Due to cultivation increasing, they also had more space for labour, which was therefore calling for the higher demand of slaves for the country's economic development. The North American and Caribbean colonies the British owned were producing items extremely fast and therefore the British were importing great amounts of this produce. This showed the British how profitable and valuable their colonies were to them. It was also obvious about how much slavery played a part in the expansion of the British Empire. In conclusion, there were many factors that contributed to the expansion of the British Empire. Slavery was partly involved and because of the slave trade, the empire received a vast amount of profits and imported a great deal of items. However, the slave trade only worked with other territorial additions such as the government, the wars and colonies. Without these, the slave trade would not have been so successful in working towards making the British Empire enhance in size. I agree with the statement, as I think slavery and the British Empire were closely related. 1 http://www.nationalarchives.gov.uk/education/lessons/lesson27.htm 2 Kenneth Morgan 3 http://www.britishempire.co.uk/maproom/goldcoast.htm 4 Handout ?? ?? ?? ?? Noorie Madarbux ...read more.