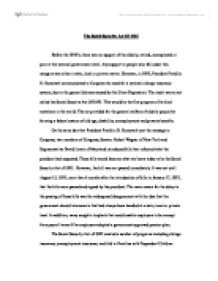 The Social Security Act of 1935

The Social Security Act Of 1935 Before the 1930's, there was no support of the elderly, retired, unemployed or poor at the national government level. Any support to people who fell under this category was either a state, local or private matter. However, in 1935, President Franklin D. Roosevelt communicated to Congress the need for a national old-age insurance system, due to the general distress caused by the Great Depression. The result was an act called the Social Security Act Of 1935. This would be the first program of its kind anywhere in the world. The act provided for the general welfare of elderly people by forming a federal system of old age, disability, unemployment and poverty benefits. On the same day that President Franklin D. Roosevelt sent the message to Congress, two members of Congress, Senator Robert Wagner of New York and Representative David Lewis of Maryland introduced bills that reflected what the president had requested. These bills would become what we know today to be the Social Security Act of 1935. ...read more.

programs were created to help the very poor. The AFDC programs are referred to as means tested programs. These programs used statistics of what the average income of certain size families are to determine whether a family is above or below the poverty line. If the family's income is below the poverty line, they are eligible to receive AFDC. AFDC was often referred to as welfare, and was given to families with children, but no breadwinner. The major issues with The Social Security Act of 1935 were funding, and how it was to be run. Since there was no previous program elsewhere that even resembled this Act, there was no precedent to go by. It was decided that for the program called old age Insurance, employees that qualified would be obligated to pay a payroll tax. This payroll tax consisted of a 1% tax of the first $3,000 earned, for both the employee and employer to pay. Therefore, in effect, 2% tax was being paid to fund the old age insurance, now named simply, social security. ...read more.

Over the years, it has become increasingly evident how important this act has become to the American people. The various programs included in The Social Security Act of 1935 have helped fight against poverty. They have done this by giving benefits to retirees over the age of 65, which in turn, reduces the amount of poverty among the elderly. In addition, the unemployment insurance program gives benefits to people who are out of work, but are unable to obtain a new job. Lastly, the AFDC programs help the poorest people who have children. These people all fall below the poverty line. Without this assistance, many of these families would be living in extremely bad conditions in extreme poverty. In conclusion, The Social Security Act of 1935 created different programs to give aid to certain groups. These groups included the poor, the elderly, the disabled and the unemployed. The main programs that were created were the entitlement programs, the old age insurance program, also called social security, the unemployment insurance program, and means tested programs including the AFDC programs. These programs were all created in hopes of helping the American society recover from the Great depression. ...read more.