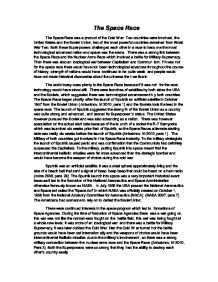 The Space Race was a product of the Cold War. Two countries were involved, the United States and the Soviet Union

The Space Race The Space Race was a product of the Cold War. Two countries were involved, the United States and the Soviet Union, two of the most powerful countries remained from World War Two, Both these Superpowers challenged each other in a race to become the most technological advanced nation and space was the arena. There was a strong link between the Space Race and the Nuclear Arms Race which involved a battle for Military Supremacy. Then there was also an Ideological war between Capitalism and Communism. If it was not for the space race there would have not been technological advances throughout the course of history, strength of nations would have continued to be quite weak, and people would have not made historical discoveries about the universe that we live in. The world today owes plenty to the Space Race because if it was not for the race technology would have stood still. There were launches of satellites by both sides the USA and the Soviets, which suggested there was technological advancement by both countries. The Space Race began shortly after the launch of Sputnik an artificial satellite in October 1957 from the Soviet Union (Anissimov, M 2010, para 1) and the Soviets took the lead in the space race. The launch of Sputnik suggested the strength of the Soviet Union as a country was quite strong and advanced, and earned its Superpower'd status. ...read more.

As technology advanced so did the space programs and society. The Soviets built a wall for Germany and it became a symbol of Soviet repression, Soon the Soviet were seen as juggling space technology in one hand and Soviet policy in the other (Cadbury 2006, p. 260). Shortly after Sputnik 1 was launched, Sputnik 2 was up and running and was launched into space in 1957 by the USSR. The Americans needed a solution fast because a capitalist society was starting to fall behind the Communists. The American Solution was to put the navy and US Army in charge until NASA was up and running. The US Army and Navy had ballistic missile projects in process, and each very much wanted to be the first to put an American made satellite in orbit. The Navy was first to be given the chance on December 6, 1957 to put a satellite into space, they failed terribly as their rocket the Vanguard TV-3 blew up on the launch pad. The Americans then scrambled and quickly assembled the next rocket to launch into space (NASA n.d., para 2). The Space program quickly turned to the US Army for a solution and catch up with the space race. Their solution was a modified Redstone ballistic missile which was to carry a satellite named Explorer 1. On January 31, 1958 there was a successful launch of the Explorer 1 satellite into space. ...read more.

This single event was the most significant event for America allowing them to win the space race because they achieved their important goal of putting the first man on the moon (Long 2007, para 1). The Race to the moon became a defining part of the struggle for global supremacy. Victory in this race meant more than just collecting moon rocks or planting flags. The Space race became an open contest between Capitalism and Communism. Victory was not just a matter of pride. National security and global stability were at stake. (Cadbury 2006, p. 9) In conclusion it was hard to tell which country was leading ahead in the Space Race at some points in time, each country achieved historical discoveries. However the landing on the moon was really the main event that set the finish line for the space race. Once landing and walking on the moon was achieved there was little else to do with the current technology that they had during that time. The cold war was still going on but the Space Race had ended part of what the Cold War was about which was the rivalry and conflict of super powers, Ideological philosophies and military supremacy. The cold war ended later when the Soviets ceased to be a Superpower and the United States became winner by showing their military supremacy. The Space program still is very important today and still is continuing to this day. Both the Soviet and the United States now have a joint space programs and are helping each other out in a peaceful manner. ...read more.