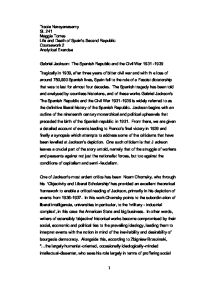 Tracie Narayanasamy SL 241 Maggie Torres Life and Death of Spain's Second Republic Coursework 2 Analytical Exercise Gabriel Jackson: The Spanish Republic and the Civil War 1931-1939 Tragically in 1939, after three years of bitter civil war and with the loss of around 750,000 Spanish lives, Spain fell to the rule of a Fascist dictatorship that was to last for almost four decades. The Spanish tragedy has been told and analysed by countless historians, and of these works Gabriel Jackson's The Spanish Republic and the Civil War 1931-1939 is widely referred to as the definitive liberal history of the Spanish Republic. Jackson begins with an outline of the nineteenth century monarchical and political upheavals that preceded the birth of the Spanish republic in 1931. From there, we are given a detailed account of events leading to Franco's final victory in 1939 and finally a synopsis which attempts to address some of the criticisms that have been levelled at Jackson's depiction. One such criticism is that Jackson leaves a crucial part of the story untold, namely that of the struggle of workers and peasants against not just the nationalist forces, but too against the conditions of capitalism and semi-feudalism. ...read more.

"Russia is a totalitarian regime...the frame of mind its leaders ...is cynical and opportunist. To expect such men to lead a social revolution in Spain, where the wildest idealism is combined with great independence of character, was out of the question."7 Political purges and show trials in the Soviet Union in 1934-36 had seen potential political opposition to Stalin brutally removed, many being accused, as was Leon Trotsky, of having been in league with Hitler. Russia was then a country "with a revolutionary past, not a revolutionary present."8 Stalin's main aim in 1936 was to ward off any threat from Hitler's Germany, by allying himself with Britain and France. Accordingly, a proletarian revolution in Spain could not be allowed to succeed, bringing as it would a threat of instability to ruling classes the world over, and a shift in the balance of European power. Communist policy as regards Spain then was one of subordinating "their [PCE] national policies to the USSR's supposed international interests."9 In effect this meant the defence of all legitimate middle-class authority at the expense the grass root militancy that could have helped avert the tragic outcome to Spain's civil war. ...read more.

The first mistaken belief is, as Chomsky points out, entirely in keeping with the "American Cold War mythology that has invented an "international Communist conspiracy" directed from Moscow ... to justify its own interventionist policies."21 The two beliefs together lead him to significantly underplay the destructive role played by Communist policy in Spain, which, while not wholly to blame for the Fascist victory, significantly dented the workers' will to fight. Many theorists have argued that only a successful revolution could have ultimately beaten the fascists, and that an early arming of workers could have averted three years of carnage. However, "We weren't being armed because the Republican authorities were more frightened of the working class than off the military." (Francisco Cabrera, Communist Youth, Seville) Communist insistence on an exclusively Popular Front, petty bourgeois programme was disastrous, which ultimately undermined the fight against Fascism. The loss of the Civil War in Spain to the fascists was more than just a military defeat, as in the words of Ronald Fraser, "For the objective was not only to castigate the defeated but to crush for all time working class militancy and the threat of socialist revolution, so that Spanish capitalism could prosper. ...read more.