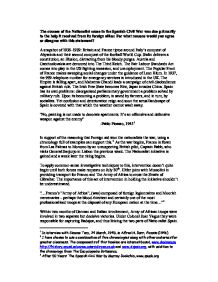 The success of the Nationalist cause in the Spanish Civil War was due primarily to the help it received from its foreign allies: For what reasons would you agree or disagree with this statement?

The success of the Nationalist cause in the Spanish Civil War was due primarily to the help it received from its foreign allies: For what reasons would you agree or disagree with this statement? A snapshot of 1936-1939: Britain and France tiptoe around Italy's conquest of Abyssinia and their second conquest of the football World Cup. Stalin delivers a constitution, an illusion, distracting from his b****y purges. Austria and Czechoslovakia are devoured into The Third Reich. The Fair Labour Standards Act comes into play in the US fighting recession, and unemployment. The Popular Front of France makes sweeping social changes under the guidance of Leon Blum. In 1937, the 999-telephone number for emergency services is introduced in the UK. The Empire is falling apart, and Mahatma Ghandi leads a campaign of civil disobedience against British rule. The Irish Free State becomes Eire, Japan invades China. Spain has its own problems: disorganised parliamentary government a problem solved by military rule. Upon its becoming a problem, is saved by farmers, and in turn, by socialists. Yet confusion and deterioration reign and soon the actual landscape of Spain is covered with that which the weather cannot wash away. "No, painting is not made to decorate apartments. It's an offensive and defensive weapon against the enemy" -Pablo Picasso, 19451 In support of the reasoning that Foreign aid won the nationalists the war, using a chronology full ...read more.

to German aircraft and Italian infantry" -Puzzo6 Baldwin and Chamberlain's 1936 Non-Intervention committee was about as successful as the rest of their appeasement policy. 'While the rules of the NIC were observed by the democracies, they were openly flouted by the dictatorships'7 Choking the French aide meant that the Spanish Republics only course of action was to flee into the arms of Russia. Outside of the international brigades, the Soviet Union was the biggest supporter of Caballero and Negrin's defending armies. Paradoxically, their help was also a hindrance. Stalin's opening gestures in the war, and much of the way through, were in their own way a form of appeasement. He had hoped to keep out of Hitler's view for as long as possible. Lee suggests he had been trying to warn Britain and France of the danger the Fuhrer represented, pulling out when it became clear they were no longer interested. Whatever the actual truth, Stalin had not supplied the Republic with enough arms to do the job properly. On October 25th, a substantial part of the third largest gold reserve in the world was transferred to Russian hands. The army of Africa while fighting for Madrid, were still occupying Spanish-Morocco without problem, aided by the Moroccan government, who had matched Italy's number, sending out seventy-five thousand troops.8 Along another border, Dr. ...read more.

Divisions over the primary objective of the war can only have made easier the nationalist mission. The length of Franco's leadership of Spain, his keeping the Republic of World War II through to his good choice of successor are aspects of evidence of the Nationalist strength outside foreign allegiance. With a view to the statement and the scope of 1936-39 to which this essay refers, I cannot judge. Much of the corporate world acted as if their involvement was necessary, whilst seeing a Nationalist victory as something of a safe bet. I can neither agree nor disagree with the statement, these facets of fact, are inseparable. "To have stopped Franco's 'Army of Africa...and its well-trained Civil Guards and police auxiliaries, would have been nothing less than miraculous once it established a strong base on the Spanish mainland. That hastily formed, untrained and virtually unequipped militiamen and women slowed up Franco's army's advance on Madrid for four months and essentially stopped it on the outskirts of the capital is a feat for which they have rarely earned the proper tribute from writers on the civil war of the past half century"10 Indeed, for Bookchin has not mentioned that the first rising in Madrid failed on July 1936, and was continually thwarted until the Nationalists entered on March 28th, 1939. The capital Madrid was relentlessly defended time and time again over those three years, with and without foreign aid. Perhaps not such a safe bet after all. ...read more.