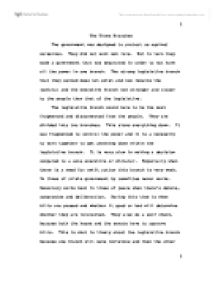 The Three Branches The government was designed to protect us against ourselves. They did not want mob rule. But in tern they made a government that was separated in order to not have all the power in one branch. The strong legislative branch that they wanted does not exist and now remains the judicial and the executive branch now stronger and closer to the people than that of the legislative. The legislative branch would have to be the most fragmented and disconnected from the people. They are divided into two branches. This slows everything down. It was fragmented to control the power and it is a necessity to work together to get anything done within the legislative branch. It is very slow in making a decision compared to a sole executive or dictator. Especially when there is a need for swift action this branch is very week. In times of crisis government by committee never works. Democracy works best in times of peace when there's debate, compromise and deliberation. ...read more.

First they are not elected they are appointed. The president's check on the judicial system is that he appoints new justices. Although he appoints them he isn't the final say on who is going to be the next justice. Congress has to approve the justices that the president nominates. Next the judicial branch is very secretive. They are secretive in that free though would be constricted if the meetings were recorded. Justices would not be able to say what they would what to say or give certain arguments for fear of being persecuted or have some sort of repercussions. There has not ever been a recording of any session for that fact. The only people that know what is said inside these meetings are those that are there. And the liberty of the people can never be endangered from this quarter as long as courts remain independent from either or both of the other two departments of power. ...read more.

The news reports on his daily activities and decisions he makes on a daily basis. The president will avoid certain things so that he wouldn't be criticized. Even current polls will show the people's approval of the president's actions. Also, he has the power to take swift action. The president can make swift decisions during a crisis needing swift action. The framers put this in the constitution so that in the time of crises we would have the swiftness to take care of the situation. The institutional imperatives import into the lawmaking context a crises mentality, which emphasizes the need for swift and decisive action, precisely the attitude the founders thought dangerous. This can be dangerous if left unchecked by the power of democracy and the vote of the people that happens every four years. Although all the branches themselves can be weak, the separation is what makes us strong as a country. Although the people may be represented in the legislative branch they are heard by the executive branch and protected by the judicial branch. ?? ?? ?? ?? 1 1 ...read more.