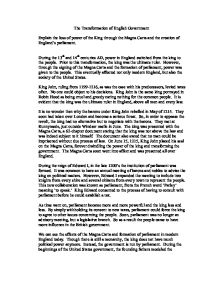 The Transformation of English Government - Explain the loss of power of the King through the Magna Carta and the creation of England's parliament.

The Transformation of English Government Explain the loss of power of the King through the Magna Carta and the creation of England's parliament. During the 13th and 14th centuries AD, power in England switched from the king to the people. Prior to this transformation, the king was the ultimate ruler. However, through the signing of the Magna Carta and the formation of parliament, power was given to the people. This eventually affected not only modern England, but also the society of the United States. King John, ruling from 1199-1216, as was the case with his predecessors, levied taxes often. No one could object to his decisions. ...read more.

They met at Runnymede, just outside Windsor castle in June. The king was presented with the Magna Carta, a 62-chapter document stating that the king was not above the law and was indeed subject to it himself. The document also stated that no man could be imprisoned without due process of law. On June 15, 1215, King John placed his seal on the Magna Carta, forever dwindling the power of the king and transforming the government. The Magna Carta soon went into affect and was presented all over England. During the reign of Edward I, in the late 1200's the institution of parliament was formed. ...read more.

By simply withholding its consent to new taxes, parliament could force the king to agree to other issues concerning the people. Soon, parliament was no longer an advisory meeting, but a legislative branch. So as a result the people came to have more influence in the British government. We can see the effects of the Magna Carta and formation of parliament in modern England today. Though there is still a monarchy, the king does not have much political power anymore. Instead, the government is run by parliament. During the beginnings of the United States government, the founding fathers modeled the Constitution after the Magna Carta. Much significance can be placed on the Magna Carta and the development of parliament for it came to be a model for democracy worldwide. ...read more.