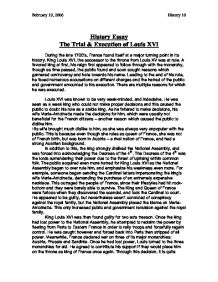 History Essay The Trial & Execution of Louis XVI During the late 1700's, France found itself at a major turning point in its history. King Louis XVI, the successor to the throne from Louis XV was at rule. A favored king at first, his reign first appeared to follow through with the monarchy, though as time passed, the public found and soon sought reasons which garnered controversy and hate towards his name. Leading to the end of his rule, he faced numerous accusations on different charges and the hatred of the public and government amounted to his execution. There are multiple reasons for which he was executed. Louis XVI was known to be very weak-minded, and indecisive. ...read more.

The Decrees of the 4th was the lords surrendering their power due to the threat of uprising within common folk. The public acquired even more hatred for King Louis XVI as the National Assembly began to over rule him, and emphasize his weakness even more. For example, someone began sending the Cardinal letters impersonating the king's wife Marie-Antoinette, demanding the purchase of an extremely expensive necklace. This outraged the people of France, since their lifestyles had hit rock-bottom and they were barely able to survive. The King and Queen of France were furious when they discovered the scandal, and took the Cardinal to court. He appeared to be guilty, but nevertheless wasn't convicted of conspiracy against the royal family, but the National Assembly placed the blame on Marie-Antoinette. ...read more.

France did win however, and the success gave the National Assembly enough power to overthrow his position as king, trial him and execute him, which led up to his final day in which he faced the guillotine on January 21, 1793. These are the reasons and events which amounted to the King's execution. The beginning of his loss of power may be at the source of the public's hate for his Austrian-born wife Marie-Antoinette, though through this the cycle of different allegations and accusations continued and amounted with time, causing him to make two acts of treason against France. His execution marked the end of the French monarchy, and helped it to evolve into the country it has become today. The metamorphosis of monarchal France to the republican country it is today has been quite immense, but generally quite beneficial to both the nation and its people. February 19, 2006 History 10 ...read more.