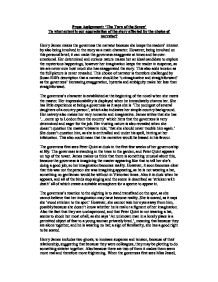 'The Turn of the Screw'

Prose Assignment: 'The Turn of the Screw' To what extent is our appreciation of the story affected by the choice of narrator? Henry James makes the governess the narrator because she keeps the readers' interest by also being involved in the story as a main character. However, being involved on this personal level, it can make the governess exaggerate at times and be over-emotional. Her determined and curious nature makes her an ideal candidate to explore the mysterious happenings, however her imagination keeps the reader in suspense, as we are never sure how much she has exaggerated the story. This also adds tension as the full picture is never revealed. This choice of narrator is therefore challenged by Susan Hill's description that a narrator should be 'unimaginative and straightforward' as the governess' increasing exaggeration, hysteria and ambiguity make her less than straightforward. The governess's character is established at the beginning of the novel when she meets the master. Her impressionability is displayed when he immediately charms her. She has little experience at being a governess as it says she is 'The youngest of several daughters of a country parson', which also indicates her simple country background. Her naivety also makes her very romantic and imaginative. ...read more.

She later uses words like 'tragic, woe and miserable' to describe her, suggesting more sympathy, maybe because they also share the same position as governess. This fact adds further tension, because now the governess can relate to Miss. Jessel she is convinced that the ghosts are real, which contributes to her paranoia and hysteria. Henry James increases the drama with the second and third sightings of Peter Quint, primarily because with each occasion he appears closer to the governess; on the other side of the window, and at the foot of the stairs. This makes the reader wonder what will come next. Tension is also increased, when it is revealed by Mrs. Grose that Miles spent a lot of time with Peter Quint, making the governess believe that he has come for the children. With each sighting, the governess becomes more and more paranoid and hysterical. Her fear is shown in the third sighting, by lots of broken sentences and her reluctance to tell the story for example '. She says 'I find that I really hang back; but I must take my horrid plunge, in going on with the hideous record of what happened at Bly.' which makes the reader instantly want to know what these 'hideous' things are. ...read more.