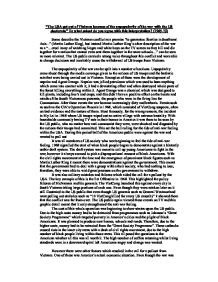 &quot;The USA got out of Vietnam because of the unpopularity of the war with the US electorate&quot; To what extent do you agree with this interpretation? (1965-73)

“The USA got out of Vietnam because of the unpopularity of the war with the US electorate” To what extent do you agree with this interpretation? (1965-73)

Some describe the Vietnam conflict as a promise “to guarantee liberties in Southeast Asia...” (Martin Luther King), but instead Martin Luther King’s other description of the war as a “…cruel irony of watching Negro and white boys on the TV screen as they kill and die together for a nation that cannot even seat them together in the same schools…” can be seen as more relevant. The US public carried a strong voice throughout this conflict and were able to change decisions and inevitably cause the withdrawal of US troops from Vietnam.

The unpopularity of the war can be split into a number of sections. Unpopularity came about through the media coverage given to the actions of US troops and the barbaric acts that were being carried out in Vietnam. Examples of these were the development of napalm and Agent Orange. Napalm was jellied petroleum which was used to burn anything which came into contact with it; it had a devastating effect and often destroyed whole parts of the forest killing everything within it. Agent Orange was a chemical which was designed to kill plants, including tree’s and crops, and this didn’t have a positive effect on the hearts and minds of the South Vietnamese peasants, the people who were in the firing line for Communism. After these events the war became increasingly dirty and barbaric. Events such as such as the CIA’s Operation Phoenix in 1968, which consisted of VietCong suspects, often on bad evidence and the torture of them. Most famously, for the wrong reasons, the incident in My Lai in 1968 where US troops wiped out an entire village with extreme brutality. With households commonly having TV sets in their homes in America it was there to be seen by the US public, who no matter how anti-communist they were, were shocked and disgusted by the actions their troops had committed. This set the ball rolling for the tide of anti-war feeling within the USA. During this period half of the American public were against the war and wanted to pull out.

It was all members of US society who wee beginning to feel the tide of anti-war feeling. 1968 signalled the start of when black people began to demonstrate against a blatantly unfair draft system. The draft system was meant to call up young Americans to fight in the war; however it always seemed to pick a disproportional amount of black Americans. With the civil rights movement at the time and the emergence of prominent black figures such as Martin Luther King it meant there were demonstrations against the government. This meant that the government had to deal with a group within their society, who had nothing to lose; therefore, they were able to wield great pressure on the government to withdraw.

It was also military mistakes and failures which aided the call for a pullout by the USA. The key example of this is the Tet Offensive in 1968. This highlighted the policy failures of McNamara and his generals. The VietCong launched this against every city in South Vietnam taking large portions of each one. Even though they were retaken later on it still illustrated to the US public that even though US generals such as General Westmorland were pulling out statistics such as “10 VietCong killed for every US casualty” it showed them that the conflict was far from over. The US public again viewed these events on TV and this graphic detail meant that it only strengthened the anti-war feeling.

The cost of this whole operation was beginning to show strains upon the US public. Due to the high costs money had to be detracted from programmes such as Johnson’s “Great Society Programme” which targeted poverty in America’s cities and the plight of Black Americans. It was planned to produce new homes, schools and roads. Therefore, due to the higher costs, money had to be retracted from the “Great Society Programme”. These cutbacks caused riots in the inner city areas with a dash of civil rights movement, due to the high number of black people living within those areas. This all posed the questions to the American whether all this was all worth it. The high number of coffins returning whilst living standards were in a downward spiral left Americans angry and change was wanted.

However there were other factors which resulted in the call for a pullout from Vietnam. One of these was America’s actual economic situation. Even though the war was expensive, an economically strong USA would have been able to afford the operation. However, this wasn’t the case with America during this period. As taxes went up due to the “Great Society Programme” American workers began to demand higher wages causing general prices to increase. This caused high inflation meaning taxes weren’t what they were valued at before. In addition to that the fact that America had to cut expenditure in the arms sector meant that the military-industrial complex, the arms industry, suffers. This combined with inflation at the time meant that economy was in bad shape. This forced the US government to reconsider its position in Vietnam. This had political casualties too, due to the resignation of President Johnson.

It wasn’t only because of economical reasons that there was a pullout from Vietnam. There were also political reasons too. After Johnson’s resignation, Nixon came into power. Nixon was a realist and knew victory was possible in Vietnam and he knew that doubled up with the political divisions and economical problems that it was best to pull out. He announced “peace with honour” which followed in with the withdrawal of US troops, who wee replaced with South Vietnamese forces (Vietnamisation), this then bought about the end of the war. This helped ease the political squabbles back home and it also proved to be a bit of a money saver as it cut back expenses.

I have come to conclude that the most important reason for the pullout from Vietnam is due to the US public. With the satellite age in full flow at that time the TV proved to be a massive tool for the average American at the time as it allowed them to be able to fully see what their troops were really doing there. This proved to be a bad tool for the government as their mistakes came to light. Also the US government wasn’t helped by the civil rights movement at that time which created figures like Martin Luther King who spoke critically of the war and the discrimination of young black men. The economic problem and the breakdown of the “Great Society Programme” meant that the average Americans were beginning to feel the effects of the war at home even though the battles were being fought miles away.

However there were some factors which weren’t down to the American public. The stagnant economy meant that the high costs of the war were more harshly felt by the American public. Also the pullout was achieved by Nixon due to him realising that Vietnam was a lost cause with more good coming if there was a pullout from there.