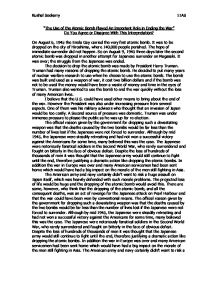 &quot;The Use of the Atomic Bomb Played An Important Role in Ending the War&quot;

"The Use of the Atomic Bomb Played An Important Role in Ending the War" Do You Agree or Disagree With This Interpretation? On August 6, 1945 the Enola Gay carried the very first atomic bomb. It was to be dropped on the city of Hiroshima, where 140,000 people perished. The hope of immediate surrender did not happen. So on August 9, 1945 three days later the second atomic bomb was dropped in another attempt for Japanese surrender on Nagasaki. It was over; the struggle from the Japanese was ended. The decision to drop the atomic bomb was made by President Harry Truman. Truman had many reasons of dropping the atomic bomb. He decided to put many years of nuclear warfare research to use when he choose to use the atomic bomb. The bomb was built and used as a weapon of war, it cost two billion dollars and if the bomb was not to be used the money would have been a waste of money and time in the eyes of Truman. ...read more.

The projected loss of life would be huge and the dropping of the atomic bomb would avoid this. There are some, however, who think that the dropping of the atomic bomb, and all the consequent deaths, was an act of revenge for the Japanese attack on Pearl Harbour and that the war could have been won by conventional means. The official reason given by the government for dropping such a devastating weapon was that the deaths caused by the two bombs would be far less than the number of lives lost if the Japanese were not forced to surrender. Although by mid 1945, the Japanese were steadily retreating and had not won a successful victory against the Americans for some time, many believed this was the case. The Japanese were notoriously fanatical soldiers in the Second World War, who rarely surrendered and fought on bitterly in the face of obvious defeat. Despite the loss of hundreds of thousands of men it was thought that the Japanese army would still continue to fight until the end, therefore justifying a dramatic action like dropping the atomic bombs. ...read more.

demand for unconditional surrender. The Japanese did not want to surrender because they thought the emperor would be taken away from them. The Japanese believed that the emperor was a god, a belief that had the unfortunate effect of restraining the peace factions in Japan. The U.S. could have told the Japanese that if they surrendered they would be allowed to keep the emperor. It is clear after analysing the evidence that America had several reasons to use the a-bomb. Nevertheless the bias in some of the sources I have used is evident. It is my belief that the use of the atomic bomb to bring about the end of World War II was not necessary. The Japanese were ready to surrender and it was not necessary to hit them with such a destructive weapon. Furthermore the lack of Japanese supplies meant that surrender was inevitable. Finally, I have come to the conclusion that that the use of the atomic bomb played a slight role in ending the war however the shortage of Japanese supplies meant that the surrender was bound to happen, unless there was someway of re-opening their ports. ?? ?? ?? ?? Kushal Sookarry 11AS ...read more.