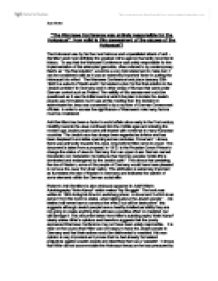 The Wannsee Conference was entirely responsible for the Holocaust. How valid is this assessment of the causes of the Holocaust?

"The Wannsee Conference was entirely responsible for the Holocaust". How valid is this assessment of the causes of the Holocaust? The Holocaust was by far the most heinous and unparalleled attack of anti-Semitism and most definitely the greatest crime against humanity recorded in history. To say that the Wannsee Conference was solely responsible for the implementation of this attempted genocide, often referred to by contemporary Nazi's as " the final solution", would be a very bold statement to make but it can be considered valid as it was an extremely important factor in putting the Holocaust into effect. The Wannsee Conference took place January 20th 1942 in a suburb of Berlin and it formulated a plan for the final solution to the "Jewish problem" in Germany and in other areas of Europe that were under German control such as Poland. The validity of this assessment could be questioned as it was the initial event at which the plan to isolate the Jewish people was formulated, but it was at this meeting that the decision to exterminate the Jews was consented to by a number of German Government officials. In order to access the significance of Wannsee's role many factors must be considered. Anti-Semitism has been a factor in world affairs since early in the first century. Hostility towards the Jews continued into the middle ages and entering the modern age Jewish people were still treated with contempt in many European countries. The Jewish race has always been regarded as inferior and has been despised in societies spanning across centuries. Document 1 shows there was animosity towards the Jews, long before Hitler came to power. The document is taken from a proposal, in 1913, to the Prussian Crown Prince to change the status of Jews in Germany from an upper class German named Konstantin von Gebstattel. He believes that German peoples "entire life is dominated and endangered by the Jewish spirit." ...read more.

The days known as "Kristallnacht" or "The night of Broken Glass" were extremely significant as evidence that the Holocaust would be the final solution that stemmed from the physical violence that was displayed on those nights in the pogrom against the Jews in Germany, which included the vandalising of Jewish businesses and homes and the beating of some people to death. Kristallnacht also brought the world's attention to the animosity towards the Jews in Germany this is shown in document D. This is an extract from The Times on 11th November 1938. Document D is a piece of primary evidence, it is unclear if it is an eyewitness account, but it is clear that the aim of the article is to shock readers with the disturbing stories form Kristallnacht. The article is from The Times, which is a British broadsheet Newspaper with a reputation as an honest trustworthy paper. The aim of "The night of Broken Glass" was to drive the Jewish people out of Germany through physical intimidation and to isolate the Jews that were left in Germany by destroying their business and livelihoods. The events listed in previous paragraphs show how the nature of the persecution of the Jews in Germany was rapidly changing from legislation that restricted Jewish influence economically, socially and politically to physical violence and intimidation. Kristallnacht appears to be the turning point at which this happened. The war began 3rd September 1939 and this again led to the Jews being used as scapegoats. Document I is significant proof of this. The document was published in Der Sturmer on 18th May 1944 and shows a Jew smiling over the dead bodies of the German Army. As stated previously Der Sturmer was created by Julius Strecher and he basically published crude anti-Semitic caricatures and literature. This was published towards the end of the war and therefore its aim was to blame the Jewish people for the War and suggest they were enjoying the blood shed, in order to turn more people against them. ...read more.

Document F is a very influential document as it is from within the Army itself and it shows that they were happy to kill Jews without the official authorisation to do so. It is clear from document G that the Wehrmacht that they were authorised to kill the Jews even in September 1941 the extract states "The struggle against Bolshevism demands ruthless and energetic action, and first of all against the Jews as well" this shows that even before the Wannsee Conference instructions were coming from Himmler the commander of the SS to eliminate the Jews before the Wannsee Conference this shows that the extermination had begun before the Wannsee Conference. When considering whether the Wannsee Conference was entirely responsible for the Holocaust, historian's interpretations on the origins of the Holocaust must be considered. The two primary interpretations are referred to as intentionalist and structuralist. There is no argument that the events as described in the timeline actually happened at those times and in that way, there is conflict only on why they happened. The Structuralist argument that Hitler just wanted to be rid of Jews and the Holocaust came about after other attempts failed. This view suggests that the Holocaust was improvised and was a response to events and circumstances, that Anti-Semitic measures became increasingly more violent and extreme and ended with a mass genocide as other solutions proved unsuccessful. Famous structuralist historians include Ian Kershaw, Uwe Adam and Martin Broszat. The intentionalist interpretation is that Hitler intended to murder the Jews from the early stage of his political career and took advantage of every opportunity to advance his goal. Renowned internationalists include Lucy Dawidowicz, Andreas Hillgruber and Alan Bullock. In my opinion, after looking through all the information I have gathered and studying many different historians' viewpoints, I would consider myself to be a moderate structuralist. I believe this because there are so many events prior to the Wannsee Conference that showed signs of wanting to get rid of the Jewish people in Europe. ?? ?? ?? ?? Ryan Stokes ...read more.