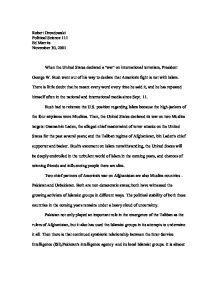 The War On Terrorism

Robert Drozdowski Political Science 111 Ed Marrits November 30, 2001 When the United States declared a "war" on international terrorism, President George W. Bush went out of his way to declare that America's fight is not with Islam. There is little doubt that he meant every word every time he said it, and he has repeated himself often in the national and international media since Sept. 11. Bush had to reiterate the U.S. position regarding Islam because the high-jackers of the four airplanes were Muslims. Then, the United States declared its war on two Muslim targets: Osama bin Laden, the alleged chief mastermind of terror attacks on the United States for the past several years; and the Taliban regime of Afghanistan, bin Laden's chief supporter and backer. Bush's statement on Islam notwithstanding, the United States will be deeply embroiled in the turbulent world of Islam in the coming years, and chances of winning friends and influencing people there are slim. ...read more.

government has made contingency plans to extricate nuclear weapons from Pakistan, if President Pervez Musharraf is ousted as a result of a takeover. According to one report, U.S. Special Forces have already conducted "dry runs" in collaboration with Israeli forces. Pakistanis are also reading these reports. It will not be known anytime soon how well these reports are being received by the pro-U.S. groups in Pakistan. More favorably, one can only imagine what preventive steps the Pakistani authorities are taking to undermine any such emergency operations by American forces. The future stability of Uzbekistan is also cloudy, unless the United States carries out security guarantees that it has reportedly proffered the harsh center of Islam as a quid pro quo for using Uzbek territory for military operations against the Taliban. If this is true and there is and everything bit of information seems to piece together then three possibilities come to mind. ...read more.

The terrorist incidents of Sept. 11 have created a situation in which the United States is likely to accidentally find itself heavily embroiled in the Muslim world. A number of Muslim countries are siding with the United States now. What is sorely missing is a realization in Washington that it is not likely to win an all out war against terrorism and still maintain the political status quo in a number of Muslim countries of the Middle East and South, West, and even Central Asia. Once Islamist radicals oust one or more governments as an unintended consequence of the U.S. war on terrorism, one can only imagine how explosive those regions would become. The Bush administration is right about one thing: the war on terrorism will not end for many years. An inescapable, though not necessarily incorrect, conclusion is that the world of Islam may be edging toward more confusion and instability. ?? ?? ?? ?? ...read more.