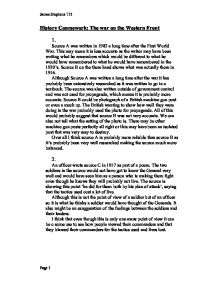 History Coursework: The war on the Western Front 1. Source A was written in 1982 a long time after the First World War. This may mean it is less accurate as the writer may have been writing what he remembers which would be different to what he would have remembered to what he would have remembered in the 1920's. Source B on the there hand shows what was actually there in 1916. Although Source A was written a long time after the war it has probably been extensively researched as it was written to go in a textbook. The source was also written outside of government control and was not used for propaganda, which means it is probably more accurate. Source B could be photograph of a British machine gun post or even a mock up. The British wanting to show how well they were doing in the war probably used the photo for propaganda. All of this would probably suggest that source B was not very accurate. We can also not tell what the setting of the photo is. There may be other machine gun posts perfectly all right or this may have been an isolated post that was very easy to destroy. ...read more.

The picture is not very detailed and it does not show much in the way of living conditions. Or what the men are doing. If the picture was meant to be informative it would show how the soldiers were living and what they were doing in the way of fighting. The picture is also not accurate, as all the men seem to be happy even though they probably know they are just about to die. Also the commander who is standing up almost totally out of the trench would have almost certainly have been shot if he actually did this during the war. The only real information that you can get from this picture is its target audience, which is soldiers, and to have soldiers as the target audience there must have been many of them. Over all we cannot really learn much from this source. It is using the war to sell its product to people at home who know people fighting or to the soldiers actually at war so they don't really want to shoe the full horrors of war. 6. Source A, written during the war, tells us that it was difficult to gain any sort of ground. ...read more.

Source F is a cigarette advertisement from 1915 and so tells us little about why the war lasted for so long but it does tell us tobacco advertising was legal in 1915. Source G is very useful for telling us why the war lasted so long. It tells us that in the trenches mud and hygiene were major problems. "Many men got trench foot" this tells us that the hygiene was very poor and men who were not fit and healthy could not be expected to fight effectively. If both sides were the same with poor hygiene and very poor health it is not reasonable to expect them to be fighting and taking lots of land and therefore there was a long stalemate causing a long war. Overall most of the sources do help us understand why World War 1 lasted for so long, because if the tactics and the trench warfare there was a high attrition rate and it was difficult to gain ground. Most of the sources mention one or more of these points except for F which is of little use. With all of these reasons and points of view it is easy to see why the war was not over in time for Christmas. James Stephens T11 Page 1 ...read more.