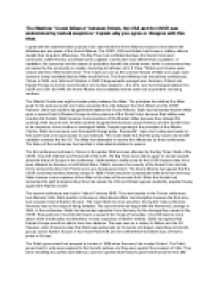 'The Wartime &quot;Grand Alliance&quot; between Britain, the USA and the USSR was undermined by mutual suspicion.' Explain why you agree or disagree with this view.

Transfer-Encoding: chunked ﻿'The Wartime "Grand Alliance" between Britain, the USA and the USSR was undermined by mutual suspicion.' Explain why you agree or disagree with this view. I agree with the statement that suspicion had undermined the Grand Alliance because it had lessen the effectiveness and power of the Grand Alliance. The USSR, USA and Britain had formed a military alliance despite their long-term differences. The Big Three had conflicted ideology; the Soviet Union were communist, whilst America and Britain were capitalist. Communism was different from capitalism. In capitalism, the resources and the means of production lies with the private owner, while in communism they are owned by the community or society. According to historian John D Clare, "Britain and America were natural enemies of the Soviet Union." This meant as soon as the common threats of Hitler and Japan were removed, it was inevitable that the Allies would fall out. The Grand Alliance had met at three conferences; Tehran in 1943, and Yalta and Potsdam in 1945. ...read more.

Stalin's concerns for security of the Soviet Union had led him to demand territory from Poland and a pro-Soviet government. The Grand Alliance had agreed that the USSR could keep territory that was seized in 1939, Poland would be compensated with land from Germany. Stalin became more suspicious of the Allies in the delay of the second front. When the Soviets had demanded the right to keep territory they had seized; the USA and Britain agreed reluctantly, despite it being against the Atlantic Charter. The second conference was held in Yalta in February 1945. The same leaders in the Tehran conference had attended Yalta. Stalin position in Europe or international affairs had strengthen because the Red army had occupied most of Eastern Europe. This made Stalin be more assertive. During the Yalta conference; Germany was on the verge of being defeated. The second front had begun with the Normandy Landings in 1944. In the conference, Stalin had demanded reparation from Germany for the damage they caused in the USSR. Roosevelt and Churchill didn?t want a repeat of the Treaty of Versailles. ...read more.

Truman was anti-communist and was suspicious of the Soviet Union. Germany had been defeated and Japan was on the verge of defeat. The USA was planning to use atomic bomb, which they have tested in 1945, against Japan. The Grand Alliance had agreed to deal with Germany in their own ways in their own zones. Stalin did not trust Truman because he had informed Stalin about the atomic bomb in the conference. Stalin became suspicious of the USA actions and therefore, began the breakdown of the Grand Alliance and the arms race. Truman began to detest Stalin because he became angered by the fact that the Soviets' had a sphere of influence over Eastern Europe. Overall, suspicion had undermined the Grand Alliance despite the agreement over the division of Germany. However, many disagreement had remained unsolved, such as the delay of the second front and the creation of the atomic bomb and the Atlantic Charter. Stalin had taken over Eastern Europe and it seemed unlikely he would allow free elections in the Soviet sphere of influence. The USA's atomic bomb has threatened the USSR, which deepened the mistrust between the Grand Alliance. ...read more.