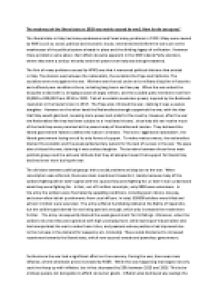 The weakness of the liberal state in Italy in 1919 was mainly caused by WW1. How far do you agree?

﻿The weakness of the liberal state in 1919 was mainly caused by ww1. How far do you agree? The liberal state in Italy had many weaknesses and faced many problems in 1919. Many were caused by WW1 such as, social, political and economic issues, several existed before the war such as the weaknesses of the political system already in place and the dividing legacy of unification. However these problems came about, their effects became apparent in the 1919 Liberal Party elections, where they were a serious minority and their power over Italy was being threatened. The first of many problems caused by WW1 was that it worsened political divisions that existed in Italy. The division was between the nationalists, the socialists the Pope and Catholics. The socialists were very against the war. Workers were forced under strict military discipline in factories and suffered poor conditions there, including long hours and low pay. When the war ended the discipline ended with it, bringing a wave of angry strikers, and the socialist party members rose from 50,000 to 200,000 from 1914 to 1919. ...read more.

In total, 650000 soldiers were killed and almost 1 million were wounded. The army suffered humiliating defeat at the Battle of Caporetto, but the soldiers got blamed for not being patriotic enough, which only increased the resentment further. The army consequently blamed the weak government for its failings. Moreover, when the soldiers returned they were greeted with high unemployment, while learning of industrialists who had manipulated the war to make them richer, and peasants whose positions had improved due to the increase in the demand for weaponry etc. (industry). These social divides led to increased resentment towards the liberal state, which now secured a weak and powerless government. Furthermore the war had a significant effect on the economy. During the war, there was mass inflation, where wholesale prices increased by 400%. While this was happening real wages not only could not keep up with inflation, but in fact decreased by 25% between 1915 and 1918. This led to ordinary people not being able to afford consumer goods. ...read more.

The government was made up only of Piedmonts superiority, so was not a true representation of the will of the population and was not a true democracy. As a result, resentment built towards the new liberal government. Furthermore, only 2% of the Italian population could vote, and these were wealthy middle class citizens, so peasants and the working class had little say in politics and therefore felt excluded. The liberal government had already established an ineffective and corrupt political system before the war even began. In conclusion I think that the weaknesses of the liberal state were mainly caused by WW1, this is because firstly, the decision to go to war was not unanimous; it was only decided by a few politicians, without consulting the population or even parliament. It therefore didn?t have the support of the majority of people. Secondly the war not only created economic problems, it also worsened those that already existed in Italy. These problems may have been resolved if the war had not occurred. The war only highlighted the incompetence and weaknesses of the liberal state. How far do you agree that the political elite (liberal politicians, king) were responsible for Mussolini?s appointment as Prime Minister in 1922? ...read more.