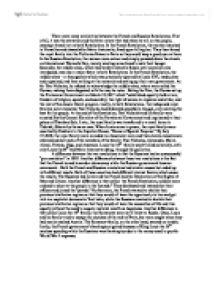 There were many similarities between the French and Russian Revolutions. First of all, it was the starvation and the bitter winter that had taken its toll on the people, causing a bread riot on both Revolutions.

There were many similarities between the French and Russian Revolutions. First of all, it was the starvation and the bitter winter that had taken its toll on the people, causing a bread riot on both Revolutions. In the French Revolution, the women marched to Versailles and chased after Marie Antoinette, fixed upon killing her. They then forced the royal family into the Tuilleries Palace in Paris so they could keep a good eye on them. In the Russian Revolution, the women were calmer and simply paraded down the streets on International Women's Day, merely wanting some bread to sate their hunger. Secondly, the middle-class, which had hardly existed in Russia until socialism was introduced, was also a major factor in both Revolutions. ...read more.

At the end of the Revolution, Tsar Nicholas and his family were arrested first by General Kornilov of the Provisional Government and imprisoned at their palace of Tsarskoe Selo. Later, the royal family was transferred to a small home in Tobolsk, Siberia by the same man. When Lenin came in power, the royal family were escorted by Rodinov to the Impatiev House, "House of Special Purpose." By July 17,1918, the royal family were crowded in a basement room and then eleven executioners entered and shot each of the members of the family: Tsar Nicholas, Alexandra, Marie, Alexei, Tatiana, Olga, and Anastasia. Louis the 16th family wasn't killed as harshly, with only Louis the16th and Marie Antoinette dying, through the guillotine. ...read more.

in a capitalist democratic 'free' state, while the Russians wanted to abolish their previous totalitarian regime so that they would all have the necessities of life and live equally without the need to acquire material wealth as happiness. Another difference is that unlike Louis the 16th family, the Romanovs were not a threat to Russia. Once, Louis and his family tried to escape the clutches of the mob of Paris, but were caught when they had nearly reached Austria. The Romanov family, on the other hand, wanted no trouble. Lastly, the French government's bankruptcy ignited because of King Louis the 16th careless spending while the Russians went bankruptcy due to the money used to pay for World War I expenses. ?? ?? ?? ?? ...read more.