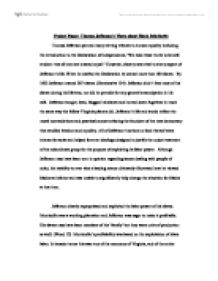 Project Paper: Thomas Jefferson's Views about Black Inferiority Thomas Jefferson penned many stirring tributes to human equality including the introduction to the Declaration of Independence, "We hold these truths to be self-evident: that all men are created equal." However, slavery was vital to every aspect of Jefferson's life. When he drafted the Declaration he owned more than 180 slaves. By 1822 Jefferson owned 267 slaves. (Dershowitz 124) Jefferson didn't free most of his slaves during his lifetime, nor did he provide for any general emancipation in his will. Jefferson bought, bred, flogged his slaves and hunted down fugitives in much the same way his fellow Virginia planers did. Jefferson's life and words reflect the moral contradictions and practical concerns facing the founders of the new democracy that extolled freedom and equality. All of Jefferson's actions or lack thereof were inherently r****t and helped form an ideology designed to justify the unjust treatment of the subordinate group for the purpose of exploiting its labor power. Although Jefferson may have been torn in opinion regarding issues dealing with people of color, his inability to ever take a leading stance ultimately illustrated how he viewed blacks as inferior and was unable to significantly help change the situation for blacks at that time. Jefferson clearly expropriated and exploited the labor power of his slaves. Monticello was a working plantation and Jefferson was eager to make it profitable. His slaves may have been members of his 'family' but they were units of production as well. ...read more.

We must now look at how Jefferson's views impacted his acts. In Jefferson's perspective, African Americans were not 'men', were not equal and therefore, were not entitled to political rights or liberty. The early American electoral system applied property qualifications to the franchise. In the same manner, Jefferson attached racial qualifications to his definition of human and it did not include African Americans. This exclusion of African Americans from the category of human has two important consequences. In economic terms it justifies slavery and the subsequent exploitation of slave labor. In political terms it justifies the exclusion of African Americans from the political process and from the protection of civil or human rights. It was argued that since blacks were racially inferior they were not entitled to equal rights; thus the implication was that they were not entitled to equal rights; therefore, they were subhuman and thus not deserving of humane treatment. (Elliot 34) However, Jefferson took more of a stance when dealing with the slave trade. Jefferson advocated ending the slave trade, but we must be careful when looking at the reasons for why he did so. The topics surrounding the slave trade and abolition were a multifaceted mix of, "economic self-interest, moral ambivalences, and political realities." (Dershowitz 137) When Jefferson drafted the Virginia Constitution in 1776 he wrote that "no person hereafter coming into Virginia shall be held in slavery under any pretext whatever." (Dershowitz 137) ...read more.

Thomas Jefferson helped perpetuate certain aspects of systemic r****m as it exists today. His thoughts on how blacks are intellectually inferior are still common in a variety of ways today. For example, in sports it had been the stereotype for awhile that African Americans were not smart enough to play the quarterback in football because it was a "thinking position." These thoughts of how black are intellectually inferior have caused Internalized Racisms which affects how people of color internalize inferiority. We can even connect this to the reading in Loewan where he explains that the two major impacts of slavery are, "the social and economic inferiority it conferred on blacks and the cultural r****m it instilled in whites." (Loewan 136) Because American slavery was based solely on race, in order to reassure themselves that they were good people, whites started insisting that they were superior to blacks, and this concept continues to exist today in the form of r****m. While we have all taken in deeply rooted r****t beliefs in today's society, it is the nature of living in a r****t society. This does not mean we are overtly bigoted and prejudiced, but it does mean that we have a limited lens and that we need to do a lot of work to expand our thinking to see the "matrix." Similarly, Thomas Jefferson was unable to expand his lens. Thomas Jefferson was unable to expand his "lens." Since Jefferson never took a definite position in regards to slavery, he never significantly helped change the situation for blacks at that time. ...read more.