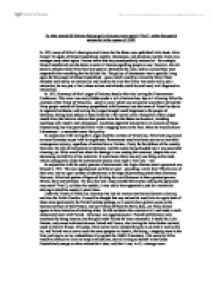 To what extend did German foreign policy become more openly &quot;Nazi&quot;, rather than purely nationalist in the course of 1938?

To what extend did German foreign policy become more openly "Nazi", rather than purely nationalist in the course of 1938? In 1925, many of Hitler's ideologies and visions for the future were published in his book, Mein Kampf. He spoke of Gross Deutschland, autarky, lebensraum, anti-Semitism and the Aryan race, amongst many other topics. Factors within this may sound perfectly nationalist - for example, Gross Deutschland was the desire to unite all German speaking people as one. However, the anti-Semitic attitude which Hitler held was purely a hatred for the Jews, and he claimed they were responsible for everything that he did not like. The policy of lebensraum was to provide living space for the people of Gross Deutschland - space which would be claimed by force These attitudes were surely not nationalist, and leads to the view that Hitler was never really just a nationalist; he was just a Nazi whose actions and attitudes could be (and were) well disguised as nationalism. In 1933, Germany left the League of Nations, shortly after also leaving the Disarmament Conference. This move was easily hidden under a veil of nationalism, due to it allowing Hitler the overturn of the Treaty of Versailles - surely a move which any nationalist would have strived for. ...read more.

territory of East Prussia, and cut Poland off from the Baltic Sea), yet Hitler did not appear to have intention of retaking either. He did not desire the colonies at all, and made a much unexpected move with Poland - forming a non-aggression pact. Poland and Germany were renowned for being enemies, but this pact made Poland far more vulnerable. It broke the Little Entente, and ceased relations between Poland and France, also leaving the latter further isolated, much to Hitler's favour. Of course, Hitler never really intended the pact to do what it said on the tin, and Poland was to serve much the same purpose as Austria; that being, a stepping stone to the East, and also to act as a subordinate ally against the USSR if necessary. This move by Hitler would be difficult to claim as simple nationalism, due to it being no benefit to the Gross Deutschland concept or other nationalistic ideas, and that it was, in all, a strange move considering the two countries previously unfriendly stance against one another. It could be said that Hitler was merely trying to act as a peace-maker, but it later came to be clear that this was not his intention, and that the pact would benefit Nazi intentions for the future. ...read more.

The memorandum included the plans for expansion into East Europe for living space, Hitler's desire for small wars to help support the German economy whilst striving for autarky. As for autarky itself, it was detailed that some aspects of it were unachievable at the time, and so war to the East could be considered a necessity to make these aspects possible. Further still, Autarky would have to be achieved in the next 5 years - Hitler wanted war with Britain and France in 1941-44/45. It can be concluded that many of Hitler's policies and aims may well have been nationalistic from the outside, but when read into, left paths to many more radical, Nazi plans. All territorial advances left doors to the East open and benefited the German economy, and in turn, aided the move towards autarky to set the country up for a state of war. Due to the territorial moves being in areas containing German speakers (Sudetenland, Austria), they were simply passed off as nationalism in uniting the German speakers to form Gross Deutschland. Moves such as the remilitarisation of the Rhineland and general rearmament (albeit on an excessive scale) were simply seen as a desire to overturn Versailles and its seemingly harsh terms. Only with the Hossbach Memorandum did it become clear that these moves would piece together to allow far more radical and very much Nazi plans to be undertaken. ...read more.