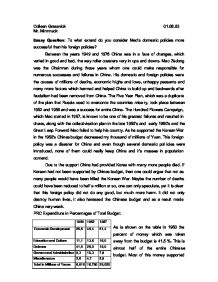 To what extend do you consider Mao's domestic policies more successful than his foreign policies?

Colleen Grassnick 01.06.03 Mr. Mimmack Essay Question: To what extend do you consider Mao's domestic policies more successful than his foreign policies? Between the years 1949 and 1976 China was in a faze of changes, which varied in good and bad, the way roller coasters vary in ups and downs. Mao Zedong was the Chairman during those years whom one could make responsible for numerous successes and failures in China. His domestic and foreign policies were the causes of millions of deaths, economic highs and lows, unhappy peasants and many more factors which harmed and helped China to build up and backwards after feudalism had been removed from China. The Five Year Plan, which was a duplicate of the plan that Russia used to overcome the countries misery, took place between 1952 and 1956 and was a success for entire China. The Hundred Flowers Campaign, which Mao started in 1957, is known to be one of his greatest failures and resulted in chaos, along with the collectivisation plan in the late 1950's and early 1960's and the Great Leap Forward Mao failed to help his country. As he supported the Korean War in the 1950's Chinas budget decreased my thousand of millions of Yuan. ...read more.

After some time thing got out of hand and Mao replaced it with the 'anti-rightist' operation. Mao sent intellectuals, layers and even teacher to the countryside, had them humiliated publicly, or let them be assassinated. The Hundred Flowers Campaign was a disaster. Thousands were killed because they had their own opinion and expressed it freely, just the way Mao had provoked. When Mao said: "It is only by using discussion, criticism and reasoning that we can really foster correct ideas, overcome wrong ideas and really settle issues." and then killed the majority of those who obeyed his new policy, one must ask oneself, what he really intended with this. One could argue that Mao did not create the Hundred Flower Campaign to get feed-back and criticism so that he can improve the countries situation, it is thought that Mao introduced the Campaign to find those who had something to say against him and his ideas in a quicker and more efficient way than before. In conclusion, Mao became more powerful, however, be betrayed his own country. This is how one can see where his domestic policies were much less successful than his foreign ones. With his foreign policy mention earlier, he provoked death due to a war, whereas in his domestic policies he provoked death due to his own ignorance and utter ruthlessness. ...read more.

If Mao would still be alive today he would possibly realize his mistakes and would think similar to the perspective of today. Mao was a man with visions and ideas, which he thought to be most important. However, he did more harm then did he help people with his domestic and foreign policies. One can even consider his foreign policies more successful in some ways, because his support in the Korean War did not kill as many people as his domestic polices resulted in killing. Nevertheless, one mustn't generalize everything. One must also look from different perspectives such as Mao's for an example. He was often left uninformed about what was really going on in the country; therefore he was most likely felt successful. The peasants had a much different point of view due to the more authentic experiences they had to undergo. But by looking at the situation form the modern eyes of today, one can clearly see the successes and failures of Chairman Mao's dictatorship. His domestic policies were less successful than his foreign policies due to the numbers of deaths. It seems as though Mao released a chain reaction of mistakes as he did his first one with the Hundred Flowers Campaign in 1957, and that there was no way of stopping it. ...read more.