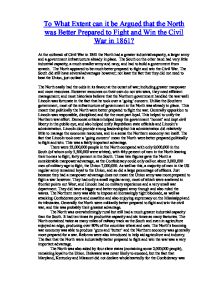 To What Extent can it be Argued that the North was Better Prepared to Fight and Win the Civil War in 1861?

To What Extent can it be Argued that the North was Better Prepared to Fight and Win the Civil War in 1861? At the outbreak of Civil War in 1861 the North had a greater industrial capacity, a larger army and a government infrastructure already in place. The South on the other hand had very little industrial capacity, a much smaller army and navy, and had to build a government from scratch. The North appeared to be much better prepared to fight and win the Civil War. The South did still have several advantages however; not least the fact that they did not need to beat the Union, just outlast it. The North easily had the odds in its favour at the outset of war; including greater manpower and more resources. However resources on their own do not win wars, they need efficient management; and most historians believe that the Northern government handled the war well. Lincoln was fortunate in the fact that he took over a 'going' concern. Unlike the Southern government, most of the infrastructure of government in the North was already in place. This meant that politically the North were better prepared to fight the war. Generally opposition to Lincoln was responsible, disciplined and for the most part loyal. ...read more.

Another advantage the North had was that the people in the eleven Confederate states were not all committed to the Confederate cause, and in many of these states pockets of Unionism existed. However bigger armies do sometimes lose wars, and in many respects the South was better prepared to fight and win the war than the North in 1861. Southerners and most European observers believed the Confederacy would win, and if Northern morale had collapsed then the Union could have been defeated. The sheer size of the Confederacy- 750,000 square miles- was perhaps its greatest aspect. It would be difficult to conquer and blockade this amount of space, and even if the North did succeed in occupying Confederate territory they would find it difficult to hold down a resentful population and maintain their supply lines. The Confederacy could trade space for time and wear down the Northern will to fight. After all, the Confederacy did not have to invade the North, only defend the South. This is always an easier option in war. Some of the terrain found in the South also gave the Confederacy an advantage. These were the key Confederate advantages and made it a lot easier for the Confederacy to wage war, and made them more prepared to fight and succeed. ...read more.

However as the war went on it was clear Britain would stay neutral, and that the South would find it difficult to raise money for the war effort, as it could sell relatively little cotton due to the blockade. The North was better prepared to fight and win the civil war at its outbreak in 1861. It had much greater industrial capacity, much larger manpower and a government infrastructure already in place. It had a much larger railway system and a better equipped army and navy. It was not entirely better prepared than the South however, who still had many advantages over their bigger adversary. The South had a geographical advantage, with the huge scale of the Confederacy perhaps being their greatest asset, allowing them to trade space for time. They were also better prepared in the aspect of aims and strategy. They only had to defend and outlast the Union, not attack and beat it. The South also had a physiological advantage. Ultimately, given its smaller battalions, the South needed to have better leadership, greater financial and economic initiative and more unity than its stronger adversary if it was to fight and win the war. In due course the North was better prepared to fight and win the Civil War in 1861, but only to a certain extent. ...read more.