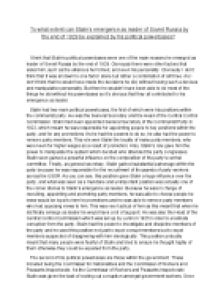 To what extent can Stalins emergence as leader of Soviet Russia by the end of 1929 be explained by his political powerbases?

﻿To what extent can Stalin?s emergence as leader of Soviet Russia by the end of 1929 be explained by his political powerbases? I think that Stalin?s political powerbases were one of the main reasons he emerged as leader of Soviet Russia by the end of 1929. Obviously there were other factors that aided him, such as the alliances he formed, and even his personality. Obviously I don?t think that it was all down to one factor alone but rather a combination of all three. As I don?t think that he would have made the decisions he did, without having such a devious and manipulative personality. But then he wouldn?t have been able to do most of the things he did without his powerbases so it?s obvious that they all contributed to his emergence as leader. Stalin had two main political powerbases, the first of which were his positions within the communist party. He was the General Secretary and the Head of the Central Control Commission. Stalin had been appointed General Secretary of the Communist Party in 1922, which meant he was responsible for appointing people to key positions within the party, and for any promotions. As he had the powers to do so, he also had the power to remove party members. This role won Stalin the loyalty of many party members, who were keen for higher wages as a result of promotion. ...read more.

Another of his government powerbases was the Commissar of Nationalities. This role made him responsible for overseeing the affairs of all non-Russians within the USSR, which at this point was roughly 50% of the population. Stalin was able to use this position to gain loyalty from those he was responsible for. Although his powerbases were important, they were not the only explanation for his success. Another important factor in Stalin?s success was his personality. He was often seen as very manipulative and devious in his acts. An example of this was when he gave Trotsky the wrong date to Lenin?s funeral. This made Trotsky look bad in the eyes of the Russian public for missing Lenin?s funeral, which made Stalin look more devoted to Lenin as he was there and he even delivered a speech at the funeral. Stalin also tried to associate himself with Lenin as much as possible because he thought that if he was seen next to such a divine figure as Lenin, the Russian public would think of him in the same light. Another of Stalin?s manipulative acts was the way that he always went with the majority decision at Politburo meetings. This was probably to help him eliminate his opponents, such a Trotsky. For example, regarding the NEP, he started off by agreeing with Bukharin in saying that it was a good idea, but once he had got rid of Trotsky and the NEP starting failing he changed his views and then said that it was a bad idea to help remove Bukharin. ...read more.

He did this by promoting his supporters to key roles so that he would always have support within the communist party. However, I don?t think it was primarily down to his powerbases because he had quite a devious character, and I think that if he didn?t have the personality that he did he wouldn?t have been able to come with some of the devious things he did. For example he gave Trotsky the wrong date to Lenin?s funeral, he always shifted alliances to go with the majority, and he tried to associate himself with Lenin as much as possible so that people would think that he and Lenin were basically one in the same. Obviously another factor was due to the alliances he made, which he used to help himself remove his opposition. I think this once again links to his very sly, devious personality as I don?t think that he would have been able to do the things he did do without it. For example forming an alliance with Zinovev and Kamenev to get rid of Trotsky, then he formed an alliance with Bukharin to help remove Zinovev, Kamenev and Trotsky, and finally once the rest were out of the way he removed Bukharin for forming a faction. Quite surprisingly his personality seems to be the underlining similarity however I don?t think it played as big a part as his political powerbases. That?s why I think that his political powerbases were the main reason for Stalin?s emergence as leader of Soviet Russia by the end of 1929. ...read more.