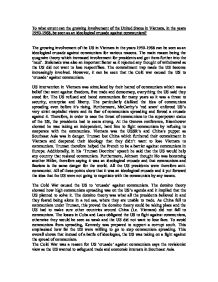 To what extent can the growing involvement of the United States in Vietnam, in the years 1950-1968, be seen as an ideological crusade against communism?

To what extent can the growing involvement of the United States in Vietnam, in the years 1950-1968, be seen as an ideological crusade against communism? The growing involvement of the US in Vietnam in the years 1950-1968 can be seen as an ideological crusade against communism for various reasons. The main reason being the quagmire theory which increased involvement for presidents and got them further into the 'mud'. Stalemate was also an important factor as it rejected any thought of withdrawal as the US did not want to lose respect/face. The commitment trap made the US become increasingly involved. However, it can be seen that the Cold war caused the US to 'crusade' against communism. US intervention in Vietnam was stimulated by their hatred of communism which was a belief that went against freedom, free trade and democracy, everything the US said they stood for. The US refused and hated communism for many years as it was a threat to security, enterprise and liberty. The particularly disliked the idea of communism spreading even before it's rising. Furthermore, McCarthy's 'red scare' enforced US's very strict capitalist views and its fear of communism spreading and forced a crusade against it. Therefore, in order to ease the threat of communism to the superpower status of the US, the presidents had to seem strong. ...read more.

The US feared the takeover of Vietnam by the USSR because if this was to happen, the USSR would recruit all resources to benefit them and go against America in the Cold war. The US could not let their trading economical interests be jeopardised as the USSR would become increasingly powerful. Each president took one step after another, thinking each step would solve the Vietnam problem. However, the US then got deeper in and therefore it became impossible to leave. Truman was committed to help the French, but as the French could not fight guerrilla tactics, this help kept on increasing as time went on. Therefore, Truman took a step in the 'mud'. Eisenhower continued the commitment without looking into it by setting up SEATO (Southeast Asia treaty organisation). This was to protect South Vietnam; however this created a reliance on American aid, rather than allowing the South Vietnamese to effectively fight the north alone. Kennedy further committed by increasing the number of advisors sent to Vietnam from 3,000 to 12,000, hoping to improve the morale of the ARVN and fortunes, but made them rely further on US help. They sent in helicopters but AP BAC only showed that this led to the ARVN being less active. After Kennedy died, Johnson promised to keep up US commitment as he was not elected as president. ...read more.

It was difficult to turn back once Truman had committed the US to aid Vietnam through France as it would damage they credibility. By refusing the Geneva Accords and setting up MAAG and SEATO, Eisenhower further committed US to Vietnam. As he sent in more military advisers, once they are in South Vietnam, it is difficult to come out. The ARVN were lacking motivation and were bad fighters who needed to be supported or they wouldn't be able to defend US advisers. More and more Americans became actively involved as Kennedy sent in Green Berets and helicopters. Furthermore, as Johnson sends in troops to protect the advisers, this further makes the US become increasingly committed. Overall, there were various steps that made the US involved and committed in Vietnam but they were trapped in the end anyway. To conclude, the growing involvement of the US in Vietnam was highly due to the ideological crusade against communism. The US were committed to Vietnam even though they knew they were not going to win, but wanted to avoid being seen to lose by American voters. Also, due to their ignorance of the situation, each successive president made decisions that furthered their commitment. The cold war shows that the US was adopting a battle against the spread of communism, rather than a battle of ideologies. Overall, it seems that US involvement was fuelled by their hatred of communism. ?? ?? ?? ?? ...read more.