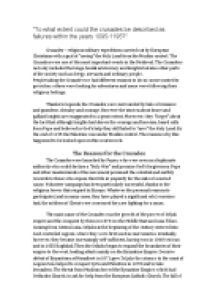 To what extent could the Crusades be described as failure within the years 1095-1195?

﻿"To what extent could the crusades be described as failures within the years 1095-1195?" Crusades ? religious military expeditions carried out by European Christians with a goal of ?saving? the Holy Land from the Muslim control. The Crusades were one of the most important events in the Medieval. The Crusaders not only included the kings, feudal aristocracy and knights but also other parts of the society such as clergy, servants and ordinary people. People taking the Crusade vow had different reasons to do so: some wanted to get richer, others were looking for adventures and some were following their religious feelings. Thanks to legends, the Crusades were surrounded by halo of romance and grandeur, chivalry and courage. However the stories about brave and gallant knights are exaggerated to a great extent. Moreover, they ?forget? about the fact that although knights had shown the courage and heroism, heard calls from Pope and believed in God?s help they still failed to ?save? the Holy Land. By the end of 1195 the Palestine was under Muslim control. The reasons why this happened to be looked upon in this coursework. The Reasons for the Crusades The Crusades were launched by Popes, who were seen as a legitimate authority who could declare a ?Holy War? and promise God?s forgiveness. Pope and other masterminds of the movement promised the celestial and earthly rewards to those who expose their life in jeopardy for the sake of a sacred cause. Volunteer campaign has been particularly successful, thanks to the religious fervor that reigned in Europe. Whatever the personal reasons to participate (and in many cases, they have played a significant role) warriors had, the soldiers of Christ were convinced they are fighting for a cause. The main cause of the Crusades was the growth of the power of Seljuk empire and the conquest by them in 1070-ies the Middle East and Asia Minor. ...read more.

In early July 1098 after seven months of siege, the city surrendered. Byzantines and Armenians have helped take the city. Meanwhile, some French crusaders established themselves in Edessa. Baldwin of Boulogne founded the state of his own, extending on both sides of the Euphrates. It was the first crusader state in the east. Later, to the south of it a few more similar states subsequently emerged. After the capture of Antioch, the Crusaders without any obstacles moved along the coast to the south and along the way captured a few port cities. On June 6 1098 Tancred, nephew of Bohemond, finally joined his army in Bethlehem, the birthplace of Jesus. The Knights were on the way to Jerusalem. Jerusalem thoroughly prepared for a siege, there was plenty of food stocks, and to leave the enemy without water, all the wells around the city have been brought into disrepair. Crusaders lacked ladders, battering rams and siege engines for the assault on the city. They had to get themselves around the city of wood and build military equipment. It took a long time and only in July 1099 Crusaders succeeded in taking Jerusalem. They quickly dispersed throughout the city, seizing gold and silver, horses and mules, taking houses. After that, sobbing with joy the warriors went to the tomb of the Savior Jesus Christ and made amends to him. Soon after the capture of Jerusalem, the Crusaders captured most of the eastern Mediterranean coast. At the beginning of XII century the kingdom of Jerusalem was founded. It consisted of the county of Tripoli, the Principality of Antioch, the county of Edessa and of Jerusalem Kingdom. Authorities in these countries were based on a feudal hierarchy. The King of Jerusalem headed it, the other three were considered as the vassals, but in fact are independent. The Church had enormous influence in those states. It also had large land holdings. ...read more.

Soldiers did not have much confidence in his oldest son and so turned back. Only a small number of faithful knights continued their way under the leadership of Duke Frederick. On October 7, they came to Akkonu. Nevertheless, the loss of Emperor had a great influence on whole expedition. It could be said that even if most of the soldiers continued their way, they would still not be able to be as effective as they could be due to loss of Emperor. It could be said that this event almost put a cross on the whole crusade. However the work of French and British saved the expedition. French and British units came from Wesel only in late July 1190g. This happened due to constant discord between French and English. Meanwhile, the German army with the support of the fleet laid siege to Pisa Akkon. In April 1191 French and English fleet arrived in time. Saladin was forced to capitulate and surrender the city. He tried his best to avoid pre-specified redemption, and so the English King Richard I the Lionheart without hesitate ordered the killing of 2,700 Muslim prisoners. Saladin had to ask for a truce. Winners following the King of England moved to the south and went through the Jaffa towards Jerusalem. Kingdom of Jerusalem has been restored, although the Jerusalem still remained in the hands of Muslims. Capital of the kingdom was now Akkon. The Third Crusade is very controversial. Although Muslims had fighted well and even, in some way, helped to the death of German Emperor they still had to capitulate. In fact, the Crusaders won here as even the Jerusalem Kingdom was restored. However it should be noted that actually Jerusalem still stayed in the hands of Muslims, whereas the goal was to recapture Jerusalem. The war, usually, is said to be lost if the main goal is not achieved and as we can see it is the case here. Therefore we can argue that although the Third Crusade was not a total failure, it still cannot be called as a success. ...read more.