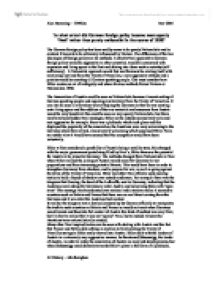 To what extent did German foreign policy become more openly 'Nazi' rather then purely nationalist in the course of 1938?

To what extent did German foreign policy become more openly ‘Nazi’ rather then purely nationalist in the course of 1938?

The German foreign policy has been said by some to be purely Nationalistic and in contrast it has said to be ultimately influenced by Nazism. The differences of the two ideologies of foreign policy are its methods. A strictly Nazi approach to German foreign policy would be aggressive to other countries, would be concerned with expansion and living space in the East and delving into ideas such as autarky (self-sufficiency).  A Nationalist approach would first and foremost be relating itself with reclaiming lost land from the Treaty of Versailles, a non-aggressive attitude and a priority would be reuniting all German speaking people. One must consider how Hitler creates an air of ambiguity and where his true methods favour Nazism or Nationalism 1938.

The Annexation of Austria could be seen as Nationalistic because it meant uniting all German speaking people and regaining lost territory from the Treaty of Versailles. It can also be seen in a harmless way of helping the Germans in that he was creating extra living space and the addition of the raw materials and resources from Austria would be very beneficial this could be seen as very openly Nationalistic, but there may have been hidden Nazi messages. Hitler on the outside seemed very calm and non-aggressive for example: there was a plebiscite which took place and this displayed the popularity of the annexation, the Austrians were very welcoming to the Germans when they arrived, almost overly welcoming which surprised Hitler. From an outside view it would have seemed that the occupation would have been voluntarily.

Hitler at first considered a possibility of Austria being a satellite state, this changed with the major government posts being filled by Nazi’s, Hitler then saw the potential for Austria to be joined to Germany. The methods changed from Nationalistic to Nazi when Hitler realised the joining of Austria would mean for Germany in war preparations and from increasing potential threats. This would have been in order to strengthen Germany from attackers, and to prepare for war, as well as going against the terms of the Treaty of Versailles. Hitler and other Nazi officials used cunning tactics to hold a façade of shadow over outside audiences. For example: there was the telegram that Goering, the head of the Luftwaffe, sent to Germany, indicating that the Austrians were asking for Germans to enter Austria and welcoming them with ‘open arms’ This message was broadcasted over national radio stations and so it seemed to countries such as Britain and France that there was no real threat coming from the Germans and it was what the Austrians had wanted.

In reality, the telegram was a device (conjured up by German officials) to manipulate the truth to such countries as Britain and France so would not react when Germany would invade and thus take full control of Austria this kind of method was very Nazi, but it is key to realise that it was not ‘openly’ Nazi, but to outside viewers the intentions were nationalistically minded.

Many other Nazi inspired tactics can be seen with dealing with Austria and the fact that France and Britain did nothing in reaction to him breaking the Treaty of Versailles yet again Hitler easily moved into Austria. Hitler dealt with the leaders of Austria in a extremely very aggressive manner, he threatened Schussnigg, the leader of Austria, in order to make the annexation of Austria an easy and steady process, but when Schussnigg acted defiantly towards Hitler’s plans in the form of a plebiscite, Hitler reacted by using intimidation via continuous phone calls and threats.  Hitler cleverly made it appear that the annexation was nationalistic but overall was being covertly Nazi by placing SS officials into Austrian chancellery to spy on the figures in power. In January 1938 in the preparations for full takeover Hitler made Seyss-Inquart (an Austrian Nazi) head of government in Austria if Schussnigg retired. Hitler blackmailed Schussnigg into standing down from his post which was not seen to the eyes of Britain or France.

In 1937 Hitler had decided that he wanted to destroy Czech however no date was set. Hitler. Czech had alliances with France and Soviet Union, where France and the SU agreed protection of Czech in 1935. By 1938 however support for Czech had almost vanished and Hitler saw just like many other European issues such as Austria that the ‘allies’ would not intervene once again. Hitler set a date to ‘crush’ Czech on the 1st October 1938 because he was infuriated in being bulled by Britain and France.

These tactics could be seen nationalist because Hitler was acquiring more living space for the Germans and reuniting German speaking peoples, but stealthily Hitler announced that he had already set a date to ‘crush’ Czech which was not know to any of the major European leaders which can be seen as an underlying Nazi tactic.

By 1st October, the occupation of the Sudetenland began by Germans, the date that he had decided to crush Czech earlier that year. Hitler had already stated his reasons for wanting acquisition of Czech because in the Hossbach Memorandum, these reasons were that he wanted more living space in the East for Germans, also he wanted resources from the country, the steel works and the cattle specifically from Czechoslovakia. Nevertheless, openly this was a nationalist tactic because what is wrong in wanting raw materials, but Hitler wanted the expansion in the East to extend into Russia for war preparations which is blatantly a Nazi method.

On the 29th September the Munich Conference was held for the four powers: Britain, France, Germany, Italy, but Czech and the Soviet Union were not invited, Mussolini acted as a mediator. In this conference Hitler came across very diplomatic and almost peaceful, it seemed to the leaders that he just wanted Germany restored to its former ‘glory’. Hitler appeared overall to be a strong Nationalist leader via stating what he wanted and when. Hitler tactfully manipulated the leaders at the Munich conference into believing that Hitler was not a war mongering person and in fact if the Czech take over would lead to action being taken against him by the French and therefore definite war he would not pursue it, although Hitler was infuriated by the way the French were trying to undermine him in the previous May crisis.  Here we can see to the outside public that Hitler was being very nationalist, but his true motives and agenda can be seen in how Hitler was able to get everything he wanted. He wanted immediate occupation of the Sudetenland which was decided to happed between the 1st to 10th October and shortly after the Czech was divided and destroyed with an obvious majority going to Germany, but some parts going to other countries such as the Teschen district going to Poland. Hitler’s tactics here were Nazi in that one of his main aims was to secure Czech so there would be no way for Russia break in via there and then it would increase the chance of expansion in Russia.

In conclusion Hitler used very Nazi motivated tactics in an almost catalytic reaction towards the attitudes of the Austrians and the fact that Britain and France did not react and chose appeasement in almost every occasion. Although much resistance was stirred from the Soviet Union and defiance from the Czech Hitler was ably to use openly Nationalist tactics, but ‘hidden’ Nazi tactics to secure what he had wanted and stated as a way back as the Hossbach Memorandum. Overall German foreign policy did become more openly Nazi with the take over of Czech but mainly the open tactics were nationalist and it was a mixture of both.