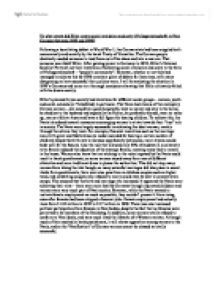 To what extent did Hitler create social revolution and unity (Volksgemeinschaft) in n**i Germany between 1933 and 1939?

To what extent did Hitler create social revolution and unity (Volksgemeinschaft) in n**i Germany between 1933 and 1939? Following a humiliating defeat in World War 1, the German state had been crippled both economically and socially by the harsh Treaty of Versailles. The German people drastically needed someone to lead them out of the chaos and into a new era. That someone was Adolf Hitler. After gaining power in Germany in 1933, Hitler's National Socialist Party set out their intentions of achieving social revolution and unity in the form of Volksgemeinschaft - "people's community". However, whether or not they had managed to achieve this by 1939 remains a point of debate for historians, with many disagreeing on how successful their policies were. I will be analysing the situation in 1930's Germany and come to a thorough conclusion showing that Hitler ultimately failed with his dream society. Hitler's planned Aryan society had intentions for different social groups - women, youth and social outcasts (or Volksfiend) in particular. The Nazis had visions of the exemplary German woman - she would be a good housewife, have no career and stay in the home, be obedient to the ...read more.

Female employment had actually risen from 11.48 million in 1933 to 12.7 million in 1939. There was also increased political participation from females in n**i bodies, despite the fact that no females were permitted to be members of the Reichstag. In addition, some women totally refused to conform to n**i ideals, and very much lived the lifestyle of a Western woman. Although much of this resulted in harsh punishment, it still shows opposition among women to the Nazis, and so the "Nazification" of German women cannot be classed as totally successful. While women play a vital part in any society, it is the youth that are the most impressionable. Hitler saw that to withhold his ideology, he would need to groom and nature the future leaders of Germany through indoctrination. It can be argued that winning over Germany's youth was Hitler's greatest success in achieving Volksgemeinschaft. The Hitler Youth (Hitler Jugend) was the organisation founded by the Nazis with intentions of indoctrinating the youth of Germany and other Aryan countries. By the year 1939 membership had exceeded the 7 million mark, a truly astonishing figure compared to the 99,586 members in 1932. ...read more.

For centuries, Christianity had been a fundamental aspect of German life. An overwhelming majority of Germans adhered to the Christian faith in 1933, with two thirds of the Christians being Protestant (Lutheran) and the remainder largely Catholic. Although originally being an advocate of religion (the 1933 Concordat with the Vatican being a prime example), Hitler secretly despised Christianity. The Treaty of Versailles had severely crippled Germany's economy and the Weimar State was a total mess. That is one of the reasons many Germans were so receptive to him as when he took power - he had promised change and prosperity. While his Aryan superpower was growing rapidly, Hitler had a minor problem that contradicted his ideology - Germans of different ethnic groups or the disabled. His "solution" to the problem was simply extermination. The whole idea behind Hitler's ideology was to "secure the future for the white race", and to him this meant wipe out the "Volksfeind". This select group basically constituted who didn't fit the category of white, physically strong and a n**i - which made up a large percentage of the population. Jews, Gypsies, Communists, Socialists, Anarchists, the disabled and many more were all victimised by the regime. Women Young people (education) Religion Economy Volksfiend Sport, leisure, culture Opposition Historians ...read more.