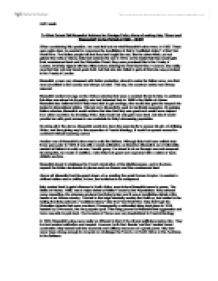 To What Extent Did Mussolini Achieve his Foreign Policy Aims of making Italy &quot;Great and Respected&quot; in the Period of 1922 - 1939?

To What Extent Did Mussolini Achieve his Foreign Policy Aims of making Italy "Great and Respected" in the Period of 1922 - 1939? When considering this question, we must first look at what Mussolini's aims were, in 1922. These were quite clear; he wanted to overcome the humiliation of Italy's "mutilated victory" of the First World War. The Italian people felt that they had fought the war, like the other Allies, yet not gained the fruits of victory; Italy had entered the war in 1915, on the basis that they would gain their unredeemed land and the Dalmatian Coast, they were promised this in the Treaty of London, that Italy signed with the Allies before entering the First World War. However, the reality was that Italy not only faced great debt, but that she also failed to gain all that she was promised in the Treaty of London. Mussolini, a man very obsessed with Italian protection, aimed to make the Italian army, one that was committed to the country and always on alert. This way, the country's safety was always ensured. Mussolini wanted revenge on the African colonies that were a constant threat to Italy. ...read more.

An example of this was in 1923, the Corfu incidents. These were to promote Italian power and prestige. It indicated Mussolini's petulant outburst, which seemed to go against the pragmatic trend of Italian diplomacy. Likewise, the Fiume incident of 1924 was a Fascist propaganda victory. In 1925 Italy signed the Locarno Treaties, which confirmed the permanence of Germany's western borders and entered into the Kellogg- Briand Pact of 1928 outlawing war. At first Mussolini was not interested in the pact, he rarely took the time to read the details. However, Mussolini did understand the advantages of signing the pacts, it was an opportunity to improve his prestige and power within Italy. The result of Mussolini signing the pacts, were that the British opinion of Mussolini became more favourable and Locarno seemed to indicate that he had, at last moved to a more moderate and sensible course of action. However, elsewhere in Europe, Mussolini was destabilizing the international scene. He was making up for lack of influence in the West, by pressing for advantages in the Balkans. His main target was the "little entente" of French-sponsored Yugoslavia, Romania and Czechoslovakia. ...read more.

Mussolini decided to go ahead with the invasion. By May 1936 Abyssinia fell to Mussolini, and he stated, "The Empire has returned the hills of Rome". Mussolini had wanted the war to stir up the nationalistic pride of the Italian people and it had. Mussolini was more popular in the summer of 136 than ever before, he was seen as great and respected by the Italian people. But the war narrowed the range of Mussolini's future diplomatic options, as Britain and France were alienated by his method of conquest and were never to trust Mussolini again. It also increased Hitler's strength in Austria. In conclusion, Mussolini's foreign policy lacked not ambitious aims, but means to go about them. It has been argued that Mussolini's inexperience deterred him from doing well. However, Mussolini did make Italy gain respect from Britain in the early 1930's. Mussolini built up a conventional diplomatic role and became respected. Mussolini did have control of Fiume, and had gained real influence in Albania. Yet he did not have any real gains in Eastern Europe and the Balkans. The French out manoeuvred Mussolini. Mussolini's hands were tied by guarantees. He had no real gains in Austria and therefore no real benefits and in Corfu he had been defeated. Ami Lewis ...read more.