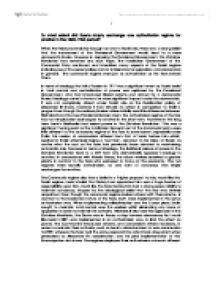 To what extent did Russia simply exchange one authoritarian regime for another in the 1855-1964 period?

To what extent did Russia simply exchange one authoritarian regime for another in the 1855-1964 period? When the February revolution brought an end to Tsarist rule, there was a strong belief that the instatement of the Provisional Government would lead to a more democratic Russia. However in deposing the Provisional Government, the October Revolution had removed any such hope. The totalitarian Government of the Communist Party continued and intensified many aspects of the Tsarist regime including use of the secret police and an intolerance for opposition and democracy in general. The communist regime were just as authoritarian as the Tsars before them. In terms of ideology the fall of Tsarism in 1917 was a significant event as Tsarist belief in total control and centralisation of power was replaced by the Provisional Government, who had introduced liberal reforms and aimed for a democratic Russia. Ideology came to have a far more significant impact under the communists. It was not completely absent under Tsarist rule as the Russification policy of Alexander III shows, however it had virtually no effect in comparison to Stalin's purges. ...read more.

Nicholas II also took this approach in the October Manifesto, the Duma was in theory a step towards democracy but much like Lenin's NEP, was implemented in an authoritarian way to limit the effect on power. The Communists introduced reforms, and concessions where necessary, in order to maintain their authority, such as Lenin's abandonment of war communism for NEP, whereas the Tsars took the same approach by only introducing reform when pressurised as Alexander II's assassination, and his prior implementation of the Emancipation Act shows. The regimes displayed their authoritarian nature in different ways, Lenin saw that war communism was not working and replaced it with NEP, whereas Alexander III put his stamp on Russia by reversing all of his father's reforms. There was also continuity in the nature of Government with the Communists retaining a strong belief in personal authority, Lenin retained all key decisions as the Tsars did before him. Both Communist and Tsarist Governments developed into authoritarian regimes because their authority was largely unchallenged once established. The removal of Khrushchev by the Central Committee and the abdication of Nicholas II in 1917 by comparison were insignificant as neither event managed to have a significant impact on the nature of Russian Government. ...read more.

Lenin used it in the Civil War against the Green armies of the peasantry and Stalin used a similar style of brute force during the collectivisation process, albeit on a much grander scale. Tsars had also used military force in containing opponents, with Stolypin's necktie under Nicholas II and Alexander II continually employing military force prior to the Emancipation Act. The army was very important to the state, as the 1905 revolution demonstrated, and their continuing use of force against opponents is one way in which they successfully maintain their authoritarian regimes. When the February Revolution brought an end to Tsardom, the newly instated Provisional Government aimed to bring a new age of democracy Russia. However the instatement of the communists in the October Revolution ensured that in the long term, Russia simply exchanged one authoritarian regime for another. Lenin defended his revolution in the Civil War and went on to continue and intensify many aspects of Tsarist autocracy, which Stalin would continue. This ensured that the communist regime was just as authoritarian as the Tsars had been before them, and they were more effective in doing so. ?? ?? ?? ?? 1 ...read more.