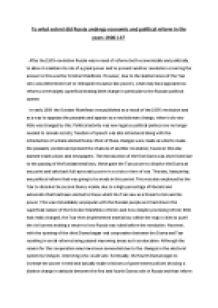 To what extent did Russia undergo economic and political reform in the years 1906-14?

﻿To what extent did Russia undergo economic and political reform in the years 1906-14? After the 1905 revolution Russia was in need of reforms both economically and politically, to allow it maintain its role of a great power and to prevent another revolution occurring the answer to this was the October Manifesto. However, due to the stubbornness of the Tsar who was determined not to relinquish his autocratic powers, what may have appeared as reforms were largely superficial making little change in particular to the Russian political system. In early 1906 the October Manifesto was published as a result of the 1905 revolution and as a way to appease the peasants and appear as a revolutionary change, when truly very little was changed by this. Political activity was now legal so political parties now no longer needed to remain secrets; freedom of speech was also introduced along with the introduction of a state elected Duma. ...read more.

reform little had really changed, the Tsar then implemented martial law within the major cities to quell the civil unrest making a return to how Russia was ruled before the revolution. However, with the opening of the third Duma began real cooperation between the Duma and Tsar resulting in social reforms being passed improving areas such as education. Although the reason for this cooperation may have been somewhat due to the changes in the electoral system by Stolypin, restricting who could vote. Eventually, the fourth Duma began to increase the power it held and actually made criticisms of government policies showing a distinct change in attitude between the first and fourth Dumas role in Russia and that reform had actually been made by them. Economic change also came about at this time due to Stolypin and agricultural reforms he had put in place. ...read more.

reforms was to eventually create a class of wealthy peasants, this would make sure they would be loyal to the Tsar giving him their support and also make other peasants want to become part of this class. However, in 1911 Stolypin was assassinated meaning that because his reforms would require time to make a significant change they actually resulted in a minimal effect on Russia?s economy despite the improvements that had been made. Overall, this period seems to be a time of reform economically and politically however as the majority of this was superficial such as the introduction of the state elected Duma to give power to the Russian people but at the same time passing the fundamental laws allowing the Tsar to take back power at any point. Also, the assassination of Stolypin effectively minimised the change his reforms were able to make shows that little truly changed in the years 1906-14. ...read more.