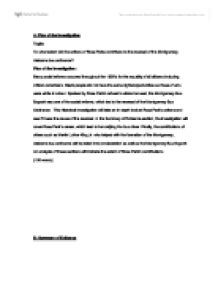 To what extent did the actions of Rosa Parks contribute to the reversal of the Montgomery, Alabama bus ordinance?

A: Plan of the Investigation Topic: To what extent did the actions of Rosa Parks contribute to the reversal of the Montgomery, Alabama bus ordinance? Plan of the Investigation: Many social reforms occurred throughout the 1900's for the equality of all citizens including African-Americans. Black people did not have the same rights/opportunities as those of who were white in colour. Sparked by Rosa Park's refusal to abide her seat, the Montgomery Bus Boycott was one of the social reforms, which led to the reversal of the Montgomery Bus Ordinance. This Historical investigation will take an in-depth look at Rosa Park's actions and see if it was the cause of the reversal. In the Summary of Evidence section, the investigation will cover Rosa Park's career, which lead to her defying the bus driver. Finally, the contributions of others such as Martin Luther King Jr. who helped with the formation of the Montgomery, Alabama bus ordinance will be taken into consideration as well as the Montgomery Bus Boycott. An analysis of these sections will indicate the extent of Rosa Park's contributions. (150 words) B: Summary of Evidence Rosa Parks * Born in Alabama, 1913 * Faced racial segregation * Attended all-black school * Involved in African Methodist Episcopal Church when she was young * Married Raymond Parks, activist * Active in Montgomery NAACP (National Association for the Advancement of Colored People) ...read more.

C: Evaluation of the Sources Two of the sources used were: " Montgomery Bus Boycott (1955-1956) ." King Institute Home. http://mlk-kpp01.stanford.edu/index.php/encyclopedia/encyclopedia/enc_montgomery_bus_boycott_1955_1956/ The article titled "Montgomery Bus Boycott" was based on previous articles from newspapers as well as published books. The article is part of a collection of many by King Institute Home, which build upon Martin Luther King Jr.'s achievements. This article deals with the entire Montgomery Bus Boycott and includes information on past events, which lead to the boycott. The article includes core information on organizations such as the National Association for the Advancement of Colored People, the Dexter Avenue Baptist Church and critical people involved with the Boycott who include E.D Nixon, Jo Ann Robinson etc. It was also useful in identifying the Woman's Political Council, an organization that already attempted to change the Montgomery Bus ordinance, but failed. Their limitations were that some background knowledge was necessary when reading the article. Nevertheless, the article was detailed and precise. Loeb, Paul . "The Real Rosa Parks." Commondreams. www.commondreams.org/views05/1031-32.htm The article titled "The Real Rosa Parks" by Paul Rogat Loeb published on October 31, 2005 recaptures the story of Rosa Park's and includes a section of his opinion. This article is about how change can be sparked by a person, but requires the help of an existing movement to fulfill the change. ...read more.

She was a key player in sustaining the boycott15 Edgar Daniel Nixon was the head of the NAACP during Parks arrest and helped organize and sustain the boycott.16 Finally, without the black citizens of Montgomery not taking the bus, the boycott wouldn't have been a success because it would not have occurred and the reversal of the Montgomery Bus Ordinance would not have occurred. (461 words) E: Conclusion Disputes occur when the rise of one who claims fame in a short period, especially if they were not of high class or were not accepted. The difference of opinion in whether Rosa Parks deserves the reputation that she holds as the "Mother of the Civil Rights Movement" started when she refused to abide her seat to a white man. Rosa Park's deserves some, but not all the fame for her actions because she was just an instigator, a spark for the flame. For the fire to continue there must be a support, wood. Martin Luther King Jr., JoAnn Gibson Robinson, Edgar Daniel Nixon and the black community within Montgomery, Alabama continued Parks effort and changed the Montgomery Bus Ordinance. For the spark there must be a creator, one who set the path of which came from Irene Morgan and Claudette Colvin. Therefore, the reversal of the Montgomery Bus Ordinance was a series of events and aftermaths. ...read more.