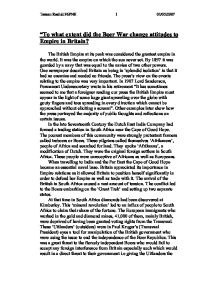 &quot;To what extent did the Boer War change attitudes to Empire in Britain?

"To what extent did the Boer War change attitudes to Empire in Britain? The British Empire at its peak was considered the greatest empire in the world. It was the empire on which the sun never set. By 1897 it was guarded by a navy that was equal to the navies of two other powers. One newspaper described Britain as being in 'splendid isolation' in that it had no enemies and needed no friends. The press's view on the events relating to the empire was very important. In 1907 Lord Sanderson, Permanent Undersecretary wrote in his retirement "It has sometimes seemed to me that a foreigner reading our press the British Empire must appear in the light of some huge giant sprawling over the globe with gouty fingers and toes spreading in every direction which cannot be approached without eliciting a scream". Other examples later show how the press portrayed the majority of public thoughts and reflections on certain issues. In the late Seventeenth Century the Dutch East India Company had formed a trading station in South Africa near the Cape of Good Hope. The poorest members of this community were strongly protestant farmers called treboers or Boers. These pilgrims called themselves 'Afrikaners', people of Africa and searched for land. They spoke 'Afrikaans', a modification of Dutch. ...read more.

The term used in the press that summer was that Britain had been victorious over the 'b****y Boers'. Lord Kitchener and Roberts had retuned. In October 1900 the Unionist government staged the 'Khaki elections' and were victorious over the liberals. It was then to become apparent that the celebrations were premature; the Boers had headed for the countryside where they prepared to fight using guerrilla tactics. By 1901 the Boers had invaded Cape Colony. This provoked Lord Kitchener to return to 'put them in their place'. Kitchener's impact on the Boer war from here on can be described as disastrous in the effect it would happen on the British Empire. His tactics were a huge political blunder and caused massive controversy. His 'scorch the earth policy', which basically consisted of the burning of farms, crops and villages was outrageous and evil. He used barbed wire fences to divide the country into zones and collected the civilian population into concentration camps. His treatment of them here was appalling and provoked much anger and debate back in Britain where even the most empire loving Englishmen were aghast with his methods. Once the news of the horrors of the concentration camps got back to England it cause massive debate. Pro-Boer liberal MP's were the first to realise Kitcheners blunder in herding women and children into so-called 'camps of refuge'. ...read more.

The emphasis on 'imperial expansion' and the great benefits on empire had been reduced. Instead emphasis was placed on the potential threat posed by Germany. Britain insecurity in itself was shown when Boy Scout and Girl Guide movements to encourage military standards in children. British defence was critically analysed after the war and considerable changes had been made. There was considerable re-planning on home defence issues as well as foreign protection of the empire. Things like food and ammunition supplies which had failed to operate efficiently during the Boer war were looked at closely. Free school meals and medical examination in schools were set up. This as well as the setting up of the Territorial Army (TA) to defend Britain in an invasion showed British fear in response to the failure of the Boer war. The concessions showed that the British had felt the negative impact of the Boer war and it had shaken them up and forced them to consider seriously thinking about their safety. Britain was a nation that was thought of as a 'policeman' it was a defender of the 'weak'. After the Boer war and especially the concentration camps that had been used Britain had lost its credibility and the power it once had to give moral lectures. Britain was once a good example to the world, after the Boer war it was still an example but of what not to do and how not to treat other nations. Tazeen Rashid F6PNE 1 01/05/2007 ...read more.