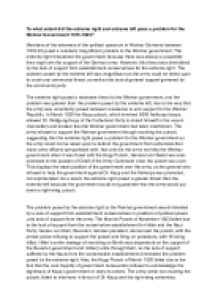 To what extent did the extreme right and extreme left pose a problem for the Weimar Government 1918-1923?

The extreme left posed a relatively insignificant threat to the Weimar government between 1918-23 due to the brutal response of the army and the freikorps to far left threats. The manner in which the Spartacist uprising of January 1919 was swiftly put down by the army in combination with freikorps units demonstrates how challenges from the far left during this period could easily be met by the german army. The uprising, which began on the 6th of January, was crushed by the 15th, demonstrating the speed at which such threats from the left could be dealt with. This is due to the fact that the army was a bastion of conservatism, with the officer class of the army actively displaying a vitriolic hatred for those on the extreme left. The brutality of the response by the Freikorp and the army to extreme left threats demonstrates the level of anger held by many in the army at the far left, whom they blamed for the armistice in November 1918, known as the â€˜Stab in the Backâ€™ myth. Leading communists Karl Liebknecht and Rosa Luxemberg were shot in police custody during the Spartacist uprising, and over 1000 died when the communists called for a general strike in Berlin in March 1919. ...read more.

the early years of the Weimar Republic due to the fact that conservatives in positions of power such as Gustav von Kahr, Minister-President of Bavaria, refused to back any attempt at overthrowing the Weimar government. However, the possibility of the army turning on the government made the extreme right a greater problem than the extreme left, which would be reliably crushed by the army. Level 5 - Wow. A really strong essay. You have remained analytical throughout, focused on the question in every paragraph, and made sure to link all the ideas back to the question using wording from the questioning at the end of your paragraphs. Your own knowledge of the events is strong, and used in a way to support the argument you are making, and not simply to tell the story. One small point I would like you to build upon is the role of the army. You say in your main argument that both left and right are insignificant, but then hint at how the role of the army is significant in the body of the essay. I would discuss this institution, alongside the judiciary and lack of punishment for political assassinations, to build upon this concept that the right remained a lingering problem that was difficult to deal with. However, still a really strong essay. Well done. ...read more.