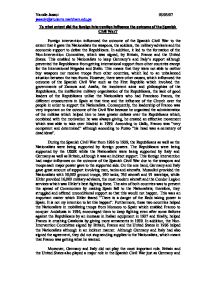 To what extent did the foreign intervention influence the outcome of the Spanish Civil War?

To what extent did the foreign intervention influence the outcome of the Spanish Civil War? Foreign intervention influenced the outcome of the Spanish Civil War to the extent that it gave the Nationalists the weapons, the soldiers, the military advisers and the economic support to defeat the Republicans. In addition, it led to the formation of the Non-Intervention Committee, which was signed, by Britain, France and the United States. This enabled to Nationalists to keep Germany's and Italy's support although prevented the Republicans from getting international support from other countries except for the International Brigades and Stalin. This means that they were not able to neither buy weapons nor receive troops from other countries, which led to an unbalanced situation between the two fronts. However, there were other causes, which influenced the outcome of the Spanish Civil War such as the First Republic which involved the governments of Zamora and Aza�a, the incoherent aims and philosophies of the Republicans, the ineffective military organization of the Republicans, the lack of good leaders of the Republicans unlike the Nationalists who had Francisco Franco, the different crosscurrents in Spain at that time and the influence of the Church over the people in order to support the Nationalists. Consequently, the leadership of Franco was very important on the outcome of the Civil War because he organized the administration of the militias which helped him to have greater defeats over the Republicans which, combined with the motivation he was always giving, he created an effective movement which was able to take over Madrid in 1939. According to Gallo, Franco was "very competent and determined" although according to Puzzo "his head was a cemetery of dead ideas". ...read more.

However, these reforms caused opposition from various sides. The Army was resented due to the removal of its ranks, the Church started to defend its traditional values while the landlords resisted the new Agrarian Reform. In other words, all the reforms made during Aza�a's government did not work and were not effective and in any case according to Lee "Aza�a therefore failed to benefit Spain's lower orders and succeeded only in terrifying the privileged." This means that more people started supporting the Nationalists because the Republican government was very unstable and their reforms were not helping the country in any kind of way. It was after the Aza�a's government, where the Nationalist and the Republicans started to consolidate. However, though the Spanish Civil War was separated between the Republicans and the Nationalists, these two groups were composed of other parties, which shared a main aim, although they had different ways of achieving it and different ideas of how they wanted Spain to be ruled. This war, as Lee maintains was "the first major struggle between fascism and communism". On the right there were the Nationalists, which consisted of the Monarchists, Carlists, conservatives, the CEDA and the Falange. The Monarchists aimed in setting up a military-backed monarchy lead by Alfonso XIII, the Carlists aimed in restoring the monarchy under a descendant of Don Carlos Maria Isidro de Borb�n, the CEDA were willing to challenge the government by legal means and not with violence while the Falange aimed in having a dictatorship. Unlike the CEDA, the other parties were willing to use violence and they had as their main aim to overthrow the Republic and replace it with an authoritarian government. ...read more.

Furthermore, Germany's, Italy's and the United State's support, enabled the Nationalists to get soldiers, armaments and oil for the aircrafts and tanks to fight the Republicans, which allowed them to fight more effectively, have more victories and finally take over Madrid on March 1939. However, it was not the only factor which led to the outcome of the Spanish Civil War. The leadership of Franco also led to the outcome of the Civil War. In other words, foreign intervention and Franco's leadership complemented each other and these two factors led to the outcome of the Spanish Civil War. This is because, without foreign intervention, Franco would not have been able to defeat the Republicans because he did not have either the necessary amount of armaments nor money. Moreover, without Franco as a leader, foreign intervention would not have been organized, administrated or motivated as well as Franco did, therefore, the Nationalists would have been defeated. Furthermore, the governments of both Zamora and Aza�a contributed to the instability of Spain and the formation of bitter opposition against the Republicans. Aza�a's government finished destabilizing the Spanish political system, which led to the Nationalists taking over the government, which according to Lee "By the time the Assembly was dissolved in January 1936 the Republic had experienced 26 governmental crises, where 72 ministers had served during a period of four and a half years". Finally, the lack of good leaders, the tensions and differences between the inner parties and the bad of organization of the militias within the Republicans, also influenced the outcome of the Spanish Civil War. ...read more.