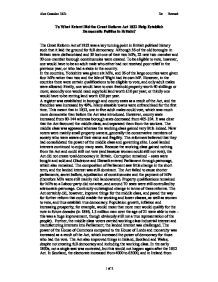 To What Extent Did the Great Reform Act 1832 Help Establish Democratic Politics in Britain?

To What Extent Did the Great Reform Act 1832 Help Establish Democratic Politics in Britain? The Great Reform Act of 1832 was a key turning point in British political history such that it laid the ground for full democracy. Although 56 of the old boroughs in Britain were disfranchised and 30 lost one of their two MPs, 22 new two-member and 20 one-member borough constituencies were created. To be eligible to vote, however, one would have to be an adult male who either had not received poor relief in the previous year, or who had a stake in the country. In the counties, Yorkshire was given six MPs, and 26 of the large counties were given four MPs rather than two and the Isle of Wight had its own MP. However, in the counties there were certain qualifications to be eligible to vote, and only adult males were allowed: Firstly, one would have to own freehold property worth 40 shillings or more; secondly one would need copyhold land worth �10 per year; or thirdly one would have to be renting land worth �50 per year. ...read more.

The composition of Parliament saw little change in the short term, and the landed interest was still dominant. The Act failed to cause shorter parliaments, secret ballots, equalisation of constituencies and the payment of MPs (therefore MPs were still mainly rich landowners). Property qualifications remained for MPs so a Labour party did not arise, and around 70 seats were still controlled by aristocratic patronage. Continuity outweighed change in terms of these reforms. The Act certainly did, however, improve things for the middle class, and paved the way for further reform that could enable the working and lower classes, as well as women to vote, and thus establish true democracy. Population growth, inflation and increasing prosperity, for example, would mean that more men would qualify for the vote in future decades (in 1886, 1.3 million men over the age of 21 were able to vote - this was a huge improvement, though obviously still not a true representation of the people). Further, the middle class voters carried working class industrial interest and manufacturing interests into Parliament; the landed interest was challenged. ...read more.

Before the Act there were no real 'parties', the main groupings of Whigs and Tories were dominated by a small number of aristocratic families. After the Act, however, the parties consolidated and manifestos were produced, which enabled party leaders to tell their party how to vote and act in the Commons and thus improved organisation. Manifestos would increase the desire of the electorate to vote for each party, and the demand for voting would push for further reform. The Great Reform Act, in conclusion, greatly improved the political situation for the middle class by increasing the number of middle class electorate in England and the United Kingdom. It had many other benefits as well which have been listed above, all of which would push for change and improve politics in Britain. However, the reform was more a pointer to the future and a symbol of challenge to the old order than it was revolutionary. The working class gained nothing and could still not vote. Although 1 in 5 male adults being eligible to vote was an improvement, it was still far from democracy. Alex Coatalen U6D Dr. Howard 1 of 2 ...read more.