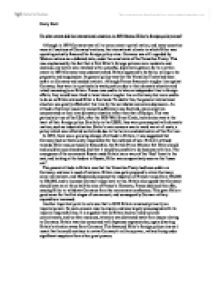 To what extent did the international situation in 1933 favour Hitler's foreign policy aims?

To what extent did the international situation in 1933 favour Hitler's foreign policy aims? Although in 1933 Germany was still to some extent a pariah nation, and many countries were still cautious of Germany's actions; the international climate in which Hitler was operating actually favoured his foreign policy aims. Germany was still regarded by Western nations as a defeated state, under the constraints of the Versailles Treaty. This was emphasised by the fact that at first Hitler's foreign policies were moderate and cautious; any action was matched with a peaceful, diplomatic gesture. So to a certain extent in 1933 Germany was underestimated. Britain appeared to be fairly, willing to be pragmatic and acquiescent. Its general policy was that the Versailles Treaty had been unfair on Germany and needed revision. Although France favoured a tougher line against Germany, they were in a particularly weak position due to their domestic situation and relied increasingly on Britain. France was unable to take an independent line in foreign affairs; they would have liked to have taken a tougher line on Germany but were unable to do so as Britain allowed Hitler a free hand. To add to this, the general international situation was greatly affected at this time by the worldwide economic depression. ...read more.

This benefited Hitler significantly, as had it not been for Britain's moderation, France would have been able to take a much tougher line against Germany. Poland was a potential obstacle to German expansionism; it had a strong army and the military-style dictatorship could have been a serious threat. However much of their military equipment was outdated, and their tactics were not suitable for modern warfare. Due to the large German minority, fighting Poland would have proven difficult. Adding to this, Poland was allied with France, making Hitler's position even more secure due to France's weak position. The rise of nationalism in Japan also benefited Hitler's aims. The military style leadership and expansionist ideas put pressure on the eastern Empires, such as Australia and India, therefore taking the attention away from Hitler's expansionist ideas. America's isolationism also favoured Hitler's foreign policy aims. The world's foremost power had little intention to try to contain Hitler in what was seen as a European affair. The situation in Russia in 1933 also favoured Hitler's aims. One of his most significant foreign policies was lebensraum; Hitler believed that in order to accommodate the Teutonic empire, expansion to the East was highly necessary. ...read more.

Therefore Hitler would be unable to mount any counterattack if France entered Germany. Although it looked on the surface unfavourable to Hitler's foreign policies, the international situation had many major flaws that would have allowed Hitler to achieve his aims without fearing any retaliation from other world powers. Although many elements were against him, if looked at carefully the international situation in itself did favour Hitler. Great Britain were content to double the German armed forces and allowing a small Luftwaffe, whilst reducing France's. Much of Europe saw any potential threat as coming from the Japanese or Soviet Russia in the east, or was preoccupied with defending their own foreign interest. Europe was also focussing on recuperating from the Great Depression, and many felt it was a time for peace and focussing on internal affairs rather than worrying about what was happening other countries. In 1933 the amendment of Versailles was seen as more acceptable to the world due to work done by the Weimar government. Hitler was also confident that no country or the League of Nations was prepared to take strong steps to counter him unless absolutely unavoidable. Therefore, in 1933 the pursuit of his aims were unlikely to be allowed to continue unchallenged. ...read more.